The Maas in Winter with the Huis te Merwerde 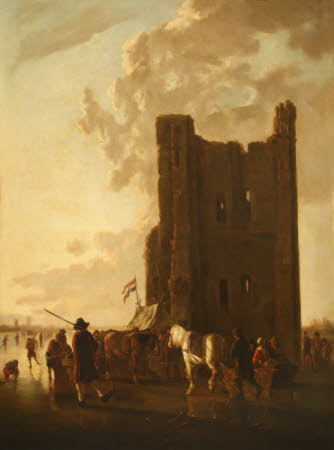 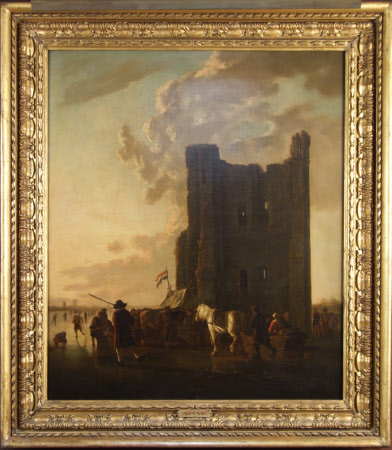 An eighteenth-century copy of a painting by Cuyp dating to the mid-1650s, now in the collection of the Earl of Yarborough. The enduring popularity of this composition, which evokes both the peaceful recreations of the seventeenth-century Dutch Republic and the country’s turbulent past is indicated by the number of copies it inspired. Numerous day-trippers on skates and sleds congregate around a koekenzopie (refreshment tent) which has been set up on the ice and topped-off with a fluttering statenvlag (state flag). The medieval Huis te Merwede looms over the festivities, locating the scene close to Dordrecht and evoking the great siege (1418) and flood (1421) of that city which brought this castle to ruin.

Oil painting on canvas, The Maas in Winter with the Huis te Merwerde, after Aelbert Cuyp (Dordrecht 1620 – Dordrecht 1691), 18th century. Skating figures and horses gathered on the ice beneath the dark brown ruins of the Huis de Merwede on the right. The statenvlag flutters above a white tent. A low sun illuminates the clouds above.

Lord Coventry, 1834; with Lesser, from whom bought by William McEwan in 1894 for £2,625; The bequest of Margaret (Anderson) McEwan, The Hon. Mrs Ronald - later Dame Margaret - Henry Fulke Greville, DBE (1863-1942) from probate records linked with the donation of the property to the National Trust in 1943. This item found on the record for Polesden Lacey pictures, drawings etc., stored in the cellar, page 167.