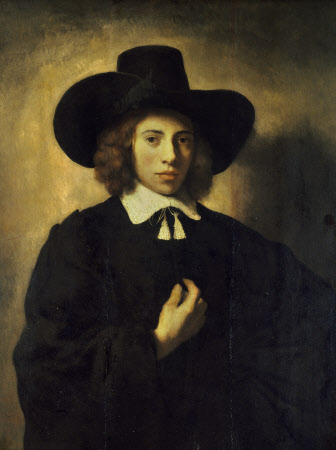 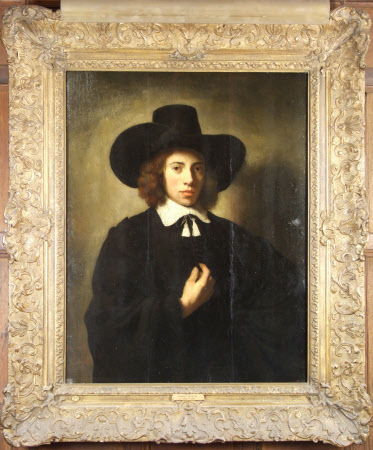 The artist’s signature, now no longer visible, was once inscribed on this canvas along with the date 1654 and the number 19. The portrait is painted in the style of Rembrandt van Rijn, in whose studio Levecq had been trained. The position of the visible hand, indicative of modesty and sincerity in Dutch portraiture, also makes the figure point back at himself, which may indicate that this is a self-portrait. The number 19 may well document the artist’s age when he painted his likeness.

Oil painting on panel, Unknown Young Man, aged 19 by Jacobus Levecq (Dordrecht 1634 – Dordrecht 1675), formerly bore signature and date 1654. A half-length portrait of a young man, facing but turned slightly to the right, his right hand on his chest, he has brown curly shoulder-length hair and wears a black coat, small white collar and large black hat, indistinct background with shadow on the right.

Charles William Fitzgerald, 4th Duke of Leinster (1819-1887) in 1878; with Agnew (came into their possesion as a work by Maes, but was recognised by Bode as being by Levecq), from whom bought by Mrs Greville, 1927; The bequest of Margaret (Anderson) McEwan, The Hon. Mrs Ronald - later Dame Margaret - Henry Fulke Greville, DBE (1863-1942) from probate records linked with the donation of the property to the National Trust in 1943. This item found on the record for Polesden Lacey pictures, drawings etc., stored in the cellar, page 165.