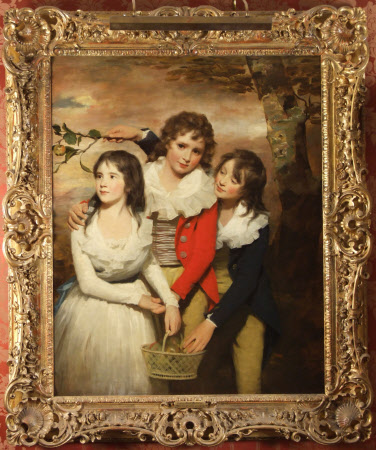 George (1778–1846), John (1778–1858) and Margaret (d.1845) Paterson, children of George and Anne Paterson, of Castle Huntly in Perthshire. This complex of image of sibling dynamics once formed a light-hearted counterpart to Raeburn’s portraits of the children’s parents. The younger brother, John, distracts his sister by waving the laden branch of an apple tree over her shoulder while he steals a fruit from her basket. George fixes the viewer with his gaze: does he protectively embrace his sister out of sincere affection, or is he complicit in the mischief?

Oil painting on canvas, The Paterson Children by Sir Henry Raeburn, RA (Stockbridge 1756 – Edinburgh 1823), circa 1790-3. Three three-quarter length portraits of the children of George Paterson of Castle Huntly, Perthshire and his wife the Honourable Mrs Paterson. The central figure is believed to be George (1778-1846), heir to his father, he pursued a military career; the other boy is thought to be John (1778 - 1858), who became Commander of an East Indiaman and the girl is thought to be Margaret who died unmarried in 1845. They are standing in a landscape, to front; a tree at the right. The central figure, George, is wearing mustard-coloured trousers and a scarlet jacket, and Margaret, his sister, to the left is wearing a white dress with blue sash looking to the left. The boy to the right, in similar mustard-coloured trousers and a dark jacket is their brother John. George stands with his right arm around his sister’s shoulders, and takes her right hand in his left. John holds an apple bough over her head while he takes an apple from the basket she is holding.