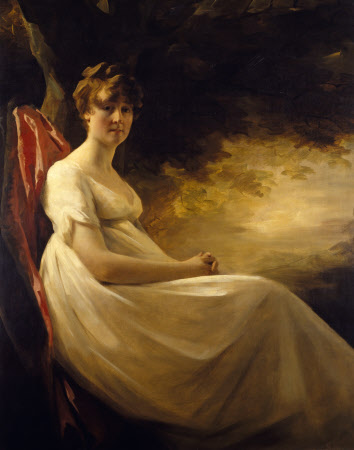 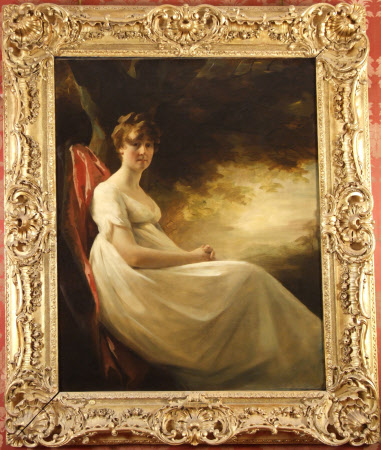 Second wife of William Simpson (1742–1808), a director of the Royal Bank of Scotland. The warm, low light suggests a pause during an evening walk and the sitter’s affinity with nature. A pendant portrait of William by Raeburn remains in the possession of his descendants.

Oil painting on canvas, Isabella Simpson (later Mrs Burroughs) by Sir Henry Raeburn, RA (Stockbridge 1756 – Edinburgh 1823), circa 1803/05. A nearly full-length portrait, seated beneath a tree, turned to the right, gazing at the spectator, her hands clasped on her lap. She has light brown hair and wears a white high-waisted dress with short sleeves, her red cloak hung on the tree behind her. A cloudy sky and distant horizon on the right.

According to Sir William Armstrong (1901), this painting belonged to the Mitchell-Innes family; it was with Dowell's, Edinburgh, in 1896; with Lesser (1849 - 1911), from whom William McEwan bought it for £2,500 in 1896; by descent to his daughter, Margaret McEwan, The Hon. Mrs Ronald Greville (1863-1942). The bequest of Margaret (Anderson) McEwan, The Hon. Mrs Ronald - later Dame Margaret - Henry Fulke Greville, DBE (1863-1942) from probate records linked with the donation of the property to the National Trust in 1943. This item found on the record for Polesden Lacey pictures, drawings etc., the Gun Room Lavatory, page 133.