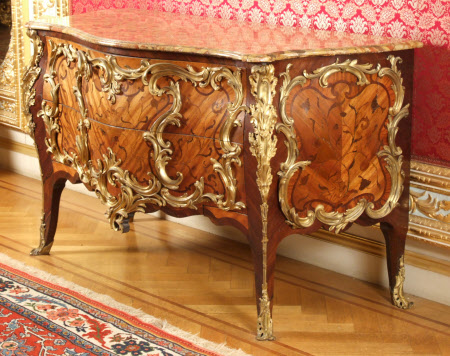 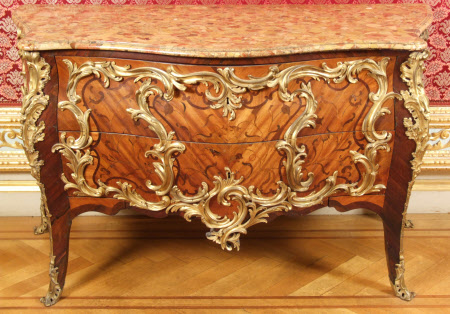 A Louis XV marquetry commode. The piece was originally kept by Mrs. Greville, the legendary Edwardian Hostess and daughter of Scottish brewer William McEwan, at her London House in Charles Street.

A chest of drawers or "commode", French, Louis XV, circa 1750, by Jacques-Philippe Carel (fl. 1723-1760), of bombé shape, inlaid with floral branches in kingwood on satiné, opening with a pair of drawers, the sides similarly shaped and decorated, on cabriole legs and foliate shell cast pierced sabots, with rocaille mounts cast and chased as scrolling foliage, the corners with typical acanthus leaves forming shell-shaped cartouches above sprays of reeds. The commode is stamped by both Jean-Philippe Carel (Master in 1723) and Denis Genty (Master in 1754). The later was established in the Faubourg-Saint-Antoine as a dealer as well as a cabinet maker and it can be suggested that he sub-contracted the ébéniste Carel to make the present commode. Next to "CAREL" stamp is the "JME" on the top back rail. Indeed, such kingwood and satiné veneers combined with floral marquetry and bombé shapes can be considered characteristic in Carel's production. A comparable commode is at the Frick collection. A.Coleridge has mentioned a supposed signature by Jacques Caffieri although "the author was unable to examine it". It seems very unlikely considering the rarity of these signatures. Indeed in 2016 the mounts were thoroughly checked (front and back) and nothing was found. However, it can be said that these gilt bronze mounts are of exceptional quality and of a particularly inventive design which suggests that they might have been conceived especially by a skillful bronzier. Like the cabinet-work the mounts were probably commissioned by Genty acting as a dealer on behalf of a distinguished collector.

Date of acquisition not recorded, but probably originally at 16 Charles Street, Mayfair, Mrs Greville's London home, and bequeathed by Margaret McEwan, The Hon. Mrs Ronald Greville (1863-1942) with Polesden Lacey, to the National Trust, in memory of her father, William McEwan (1827-1913) in 1942. This item found on the probate inventory record for Charles Street chattels at Polesden Lacey, found in Anteroom to Mrs Greville's Sitting Room, page 34.