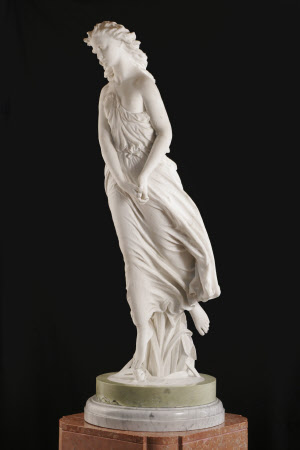 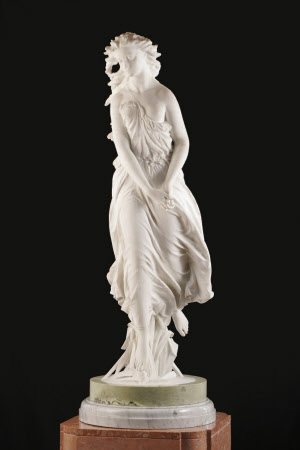 Undine, the water nymph has a sad story. She fell in love with a human and accidently drowned him.

Marble sculpture, Undine by Alexander Munro (Inverness 1825 – Cannes 1871), circa 1869. The water nymph, Undine, from Freidrich de al Motte Fouqué' s fairy romance (1811) who accidentally drowned her errant husband the knight Huldebrand with an embrace, was the subject of several 19th-century romances. The figure, which can be rotated on its stand, shows Munro’s virtuosity of technique and balance: the front foot barely touches the lilies. Munro was the son of a dyer in Inverness, but received encouragement as a sculptor from his headmaster and then from Harriet, Duchess of Sutherland, for whom he worked at Dunrobin and Cliveden (NT).He was taught by E.H. Baily, and became a close associate of the Pre-Raphaelites, carving both ideal works and portrait busts. Examples of both are at Wallington (NT). The spirit is dancing through bull rushes with the wind blowing her hair and draperies; the marble is mounted on a circular green marble base, mounted on ball-bearings, enabling it to be turned around; the statue is a replica by Munro of one he did for Sir Henry Acland.