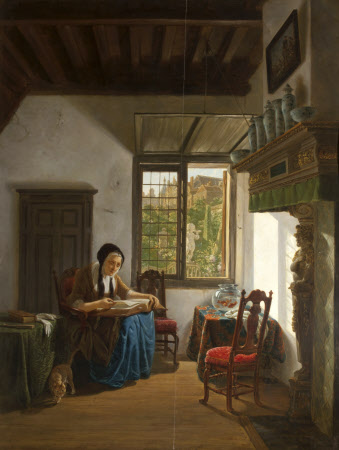 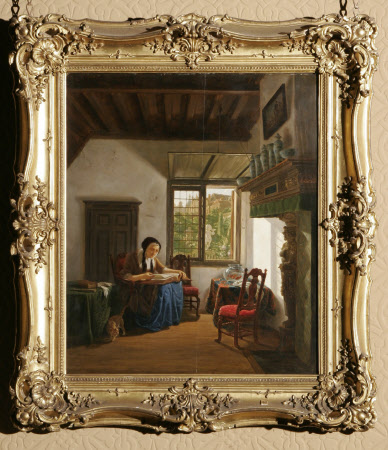 Abraham van Strij and his younger brother Jacob (1756–1815) were born in Dordrecht and worked in the style of its 17th-century School, represented notably by the artists Jacob Gerritsz Cuyp and Nicolaes Maes. This view of a cottage interior, purchased by Lord Armstrong in 1873, is typical of Abraham’s work. An old woman sits reading by an open window, through which bright light streams into the room. The occupants of the goldfish bowl are safe – for the time being, at least – from the cat in the shadows.

Oil painting on panel, Cottage Interior with Woman reading, possibly, a Bible, by Abraham van Strij (Dordrecht 1753 – Dordrecht 1826), signed bottom right: A. Van Stry. A cottage interior with an old woman reading, seated near an open window, through which can be seen a garden and buildings. A picture is on the wall above the fireplace. A cat is in ths shadows, by the woman's feet, and a goldfish bown is on the table to the right. A book, white gloves and a fan are on the table to the left.

Bottom right, on the base of a herm to the side of the mantelpiece: A. Van Stry