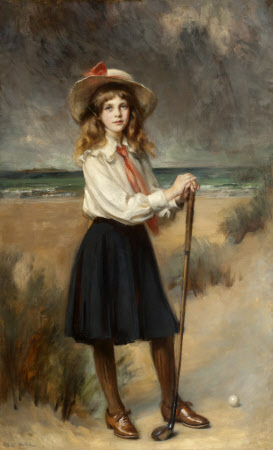 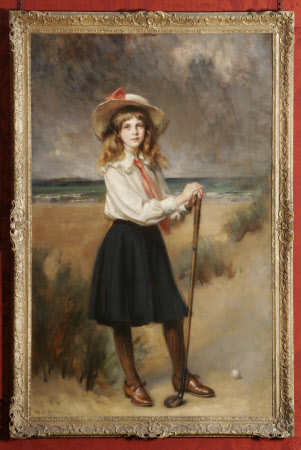 Winifred Margaret Watson-Armstrong (1894 -1912), known as Winny, was the daughter of the 2nd Lord Armstrong. She was fond of golf, and even posed for her portrait with one of her golf clubs.

Oil painting on canvas, Winifred Margaret Watson-Armstrong (1894-1912) by Mary Lemon Waller (Bideford 1851-1931), circa 1908. A full-length portrait of a young girl, the daughter of William Watson-Armstrong (1863-1941) and his first wife Winifreda Adye (1860-1914), standing on the beach at Bamburgh, turned slightly to the right and looking back at the viewer, her hands resting on a golf club. She wears a white blouse and dark skirt, with a red scarf and a red ribbon round a straw hat. Mary Lemon Waller was a portrait and genre painter who studied at the Royal Academy where she exhibited from 1877 to 1904. She was the daughter of the Reverend Hugh Fowler of Bumwood, Gloucestershire and married the genre and animal painter Samuel Edmund Waller (1850 – 1903). She and her husband were recorded living in St John’s Wood, London in 1881. She was also a member of the Royal Society of Portrait Painters, London in 1925 and exhibited sixty works there as well as the Society of Women Artists, London, Walker Art Gallery, Liverpool, the Royal Institute of Oil Painters, London, Dudley Gallery and New Gallery, London, Grosvenor Gallery, London, the Manchester City Art Gallery and at the Royal Scottish Academy.