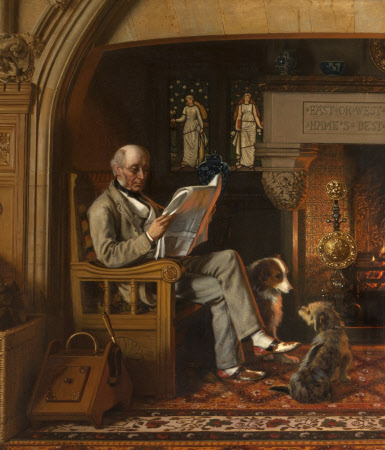 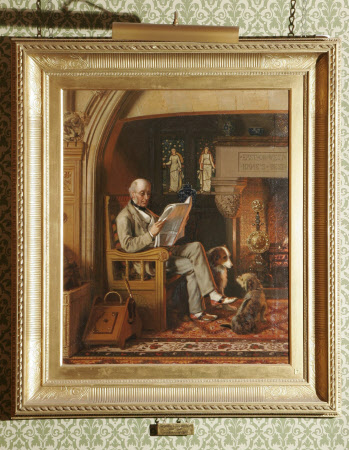 Lord Armstrong is seated on one of the sturdy oak settles in the grand stone inglenook in the Dining Room at Cragside. Reading the newspaper, with his dogs at his feet, and a fire blazing in the background, Armstrong is shown as a man of Victorian domesticity, rather than the industrial magnate he had by then become. In his otherwise faithful depiction of the inglenook, Emmerson takes a permissible artistic liberty in shunting the inscription above the fireplace onto two lines instead of one, so as to squeeze it into the picture.

Oil painting on canvas, Sir William George Armstrong, 1st Baron Armstrong of Cragside (1810-1900), in the Inglenook at Cragside, by Henry Hetherington Emmerson (Chester-le-Street 1831 – Cullercoats 1895), signed bottom left: H H Emmerson, 1880. A full-length portrait of Lord Armstrong as an elderly man, reading a newspaper seated in the Inglenook fireplace in the Dining Room at Cragside (with the motto put onto two lines so as to squeeze it in), with two dogs at his feet.

Presumably commissioned by Lord Armstrong (1810-1900); thence by descent; transferred by the Treasury to The National Trust in 1977 via the National Land Fund, aided by 3rd Baron Armstrong of Bamburgh and Cragside (1919-1987).