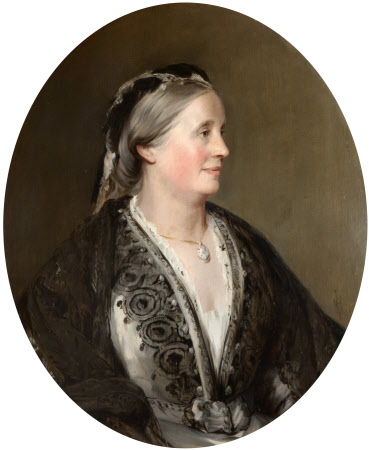 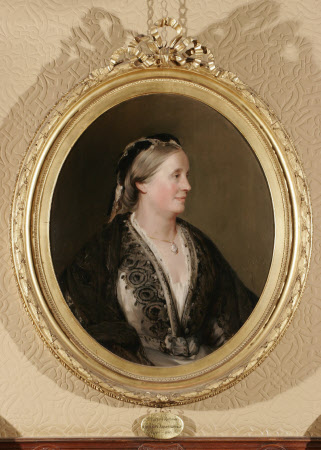 Margaret Ramshaw of Bishop Auckland was the wife of William George, 1st Lord Armstrong (1810–1900). She played an important role in the design of the gardens at Jesmond Dene, the couple’s house in Newcastle, and later at Cragside. This portrait was painted by John Callcott Horsley, who was the brother-in-law of Isambard Kingdom Brunel. It was probably through Horsley that Lord and Lady Armstrong were introduced to the architect Richard Norman Shaw, who had remodelled Horsley’s house at Cranbrook and was to work at Cragside.

Oil painting on canvas (oval), Margaret Ramshaw, Lady Armstrong (1807-1893), by John Callcott Horsley, RA (London 1817 – Cranbrook 1903), monogrammed and dated, bottom right 1868. A half-length portrait of Lady Armstrong, turned to the right in near profile, wearing a black-and-white dress with black shawl, and a gold, enamelled locket around her neck.

Lower right background: monogrammed ICH (the letters overlaid on top of one another) 1868