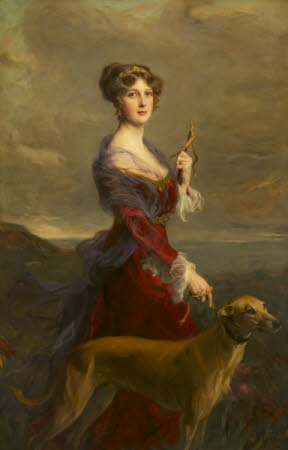 Edith Chaplin, later Lady Londonderry, strides boldy through a landscape against a dramatic sky - her favourite dog on a leash. The choice of red dress pays homage to a portrait of her great-grandmother, Lady Frances Anne Vane-Tempest, wife of the 3rd Marquess, whose riding crop - a gift from the Prince Regent - she is holding. As this stunning portrait by the fashionable Hungarian society artist suggests, she was a remarkable woman. A famous society and political hostess, whose favourite expression was ‘What lovely fun!’, she held huge receptions at Londonderry House in London and country house parties at Mount Stewart. But she was also an outspoken and articulate supporter of women’s rights as well as a devoted wife to the 7th Marquess and loving mother to Maureen, Robin, Margaret, Helen and Mairi. During the First World War she worked for the Women’s Army Auxiliary Corps and became the first military DBE.

Oil painting on canvas, Lady Edith Helen Chaplin, Marchioness of Londonderry (1878-1959) with her Favourite Hound, Fly by Philip Alexius de László de Lombos (Budapest 1869 – London 1937), signed lower left: P. A. de Laszlo/ 1913. A full-length portrait, standing in a landscape, wearing a red dress and holding a greyhound. It is a direct reference to an earlier portrait of Lady Frances Anne Vane-Tempest, wife of 3rd Marquess, both in red. The riding crop Edith is holding was a gift from the Prince Regent to Frances Anne.

Accepted by HM Government in lieu of Inheritance Tax and allocated to the National Trust, 2013

Mount Stewart, The Londonderry Collection (accepted by HM Government in lieu of Inheritance Tax and allocated to the National Trust, 2013)