Bacchante at the Bath 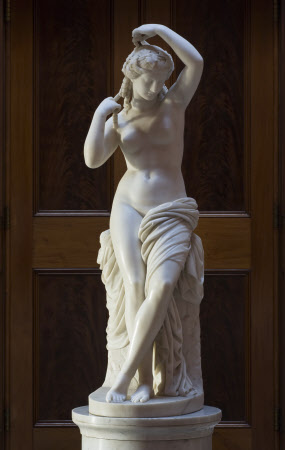 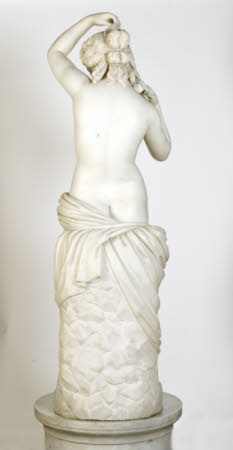 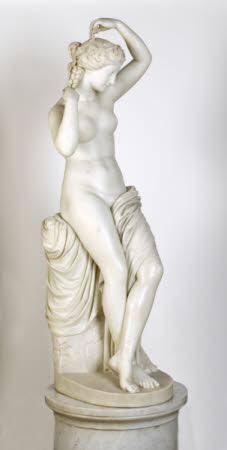 Carrara marble sculpture, Bacchante at the Bath by Lawrence MacDonald (Gask, Tayside 1799 - Rome 1878), signed and dated L. Macdonald, Fecit Romae, 1856. A Carrara marble full-length figure of a classical nude female, part draped, reclining against rock-work. This and the Venus at the Bath (NT 1221033.1) appear to be replicas or variants of statues that Macdonald had originally carved for other patrons: the Bacchante, or the Bacchante weaving her Hair that he had made for Lord Ward in 1849 (and exhibited at the Manchester Art Treasures exhibition) in 1857 (and ex-collection Wentworth Woodhouse, Yorkshire, 1874), and the Venus, that he had made for the Hon. A.D. Willoughby (1782-1865) (later 22nd Lord Willoughby de Eresby) in 1853 (exhibited at the Royal Academy in 1854 [1371] and Manchester Art Treasures exhibition 1857) and that is now (by descent) at Grimsthorpe Castle. Despite his high reputation in Edinburgh and London, MacDonald returned to Rome in September 1832, where he worked for the rest of his career. After the Danish sculptor, Bertel Thorvaldsen, died in 1844, Lawrence took over his studio in the Palazzo Barberini with his brother John MacDonald, who worked as an assistant, succeeded later by his son Alexander. He regularly sent work to the Academy exhibitions in both Edinburgh and London. Many British visitors to Rome, including the Prince and Princess of Wales in 1872, as well as Americans came to his studio and commissioned works, both portrait busts and ideal subjects.