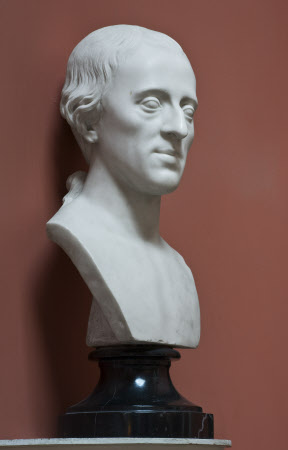 Carrara white marble on circular black marble socle, Robert Stewart, 1st Marquess of Londonderry, MP (1739–1821), Italian School, attributed to Giovanni Antonio Cybei (1706-1784), circa 1773/5. A marble portrait bust of a man. This bust appears similar in date to its pendant, also in the Hall (NT 1221031), but is stylistically less distinctive, and shows an older-looking man. He bears, indeed, some resemblance to the signed and dated portrait by Mengs of Robert Stewart, of 1758; but Robert Stewart was only nineteen when that was painted, whereas the sitter in this bust is appreciably older. Since Mengs’s portrait is the only evidence that we have for the 1st Marquess’s presence in Italy in 1758, may it not be that he made a second, equally unrecorded, tour with his younger brother, Alexander (whose presence in Italy is likewise only attested by Batoni’s signed and dated portrait of him, and – if it is correctly identified – by the bust that serves as a pendant to this one), in 1773? This would have been between the death of his first wife, Lady Sarah Seymour-Conway, in 1770, and his second marriage, to Lady Frances Pratt, in 1775. Tours of Italy and the Continent, to distract or recover from grief, were not uncommon (see for instance, Sir Richard Colt Hoare’s [Stourhead]); and the company of a younger brother, who might otherwise not have been able to afford a tour in the style of a gentleman, or to have his portrait painted by Batoni, would have been the most natural thing in the world. Since each brother may have wanted a bust for himself, or to give to the other, there would have been no compulsion to make the busts pendants – or even for them to have gone to the same sculptor to have them carved. The two brothers went, after all, to different painters in Italy – admittedly, fifteen years apart – even though both having themselves painted in ‘Vandyke’ dress.