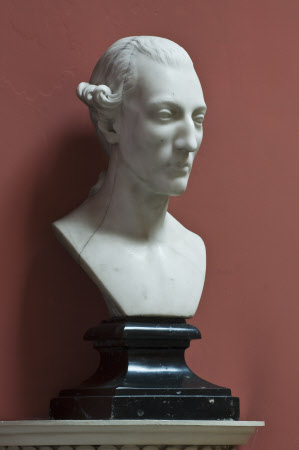 Carrara marble sculpture on square shaped black marble socle, Alexander Stewart of Ards (1743-1831), Italian (Turinese) School, attributed to Giovanni Antonio Cybei (1706-1784), circa 1773/5. A marble portrait bust of the son of Alexander Stewart and Mary Cowan. This would appear to be a bust carved in Italy (not only on stylistic grounds; English sculptors in the 18th century seem to have signed their works much more consistently than Italians), and therefore probably of a Briton on the Grand Tour. Not only does the sitter have a ‘Roman’ nose, apparently so characteristic of the Londonderry Stewarts, but he bears a strong resemblance to Batoni’s portrait inscribed as that of Alexander Stewart, and signed and dated 1773 in the Drawing Room at Mount Stewart. This is the only known record of Alexander Stewart having made the Grand Tour – but then the same is true of the Mengs portrait of 1758 of his elder brother, Robert, later 1st Marquess of Londonderry. We thus have no knowledge of his itinerary, but this bust seems neither to be the product of Rome nor of Florence, but rather of Turin, which, because of its court, was a standard stopping-place en route to the south for travellers visiting Italy. There seems every possibility that this bust should have been carved during a somewhat longer stay there.