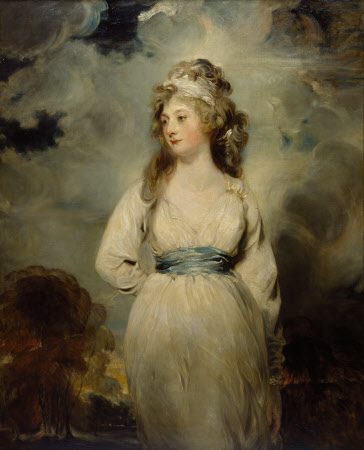 Oil painting on canvas, Lady Amelia (Emily) Anne Hobart, Viscountess Castlereagh, Marchioness of Londonderry (1772-1829), after Sir Thomas Lawrence, PRA (Bristol 1769 – London 1830). A three-quarter-length portrait of Amelia Stewart, wife of Robert, Viscount Castlereagh, later 2nd Marquess of Londonderry (1769-1822) whom she married in 1794. She stands in a landscape, facing the viewer, her head turned to the left, her right hand behind her back and her left by her side. She wears a white dress with a blue sash, and a white band in her hair. Another version is at Blickling Hall, Norfolk, NT 355546. The original painting was exhibited at the Royal Academy in 1794 (173).