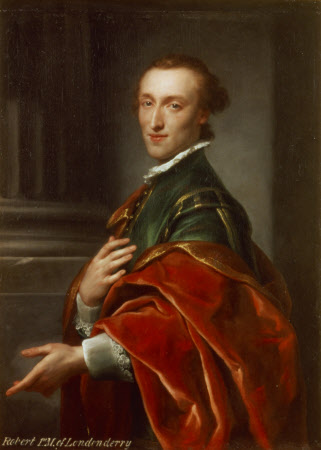 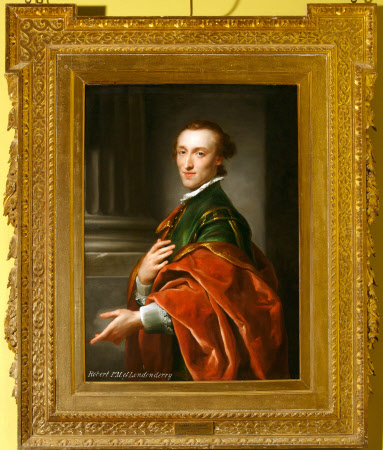 This portrait was completed Robert's Grand Tour and is considered one of the finest of only 25 similar portraits completed by Mengs. Robert built the west of the house at Mount Stewart and the Temple of the Winds, an octagonal building inspired by the Roman temples he had seen during his tour of Italy.

Oil painting on canvas, Robert Stewart, 1st Marquess of Londonderry (1739–1821) by Anton Raphael Mengs (Aussig 1728 – Rome 1779), signed and dated, on the plinth of the column at the left: Antonio Raphaele Mengs / Ano 175[8(?)]. A half-length portrait of the 1st Marquess of Londonderry, turned to the left, wearing a green, gold-embroidered coat with lace 'Vandike' collar and cuffs, and a red cloak over his left arm. A fluted column is behind him to the left. He was educated in Ireland and Geneva and was influenced by the tastes he acquired from his Grand Tour of Europe - although curiously, this portrait is the only evidence that we have for the sitter having made it to Rome.

Presumably commissioned by the sitter in Rome; thence by descent to Lady Mairi Bury (1921-2009) by whom given to the National Trust in 1976