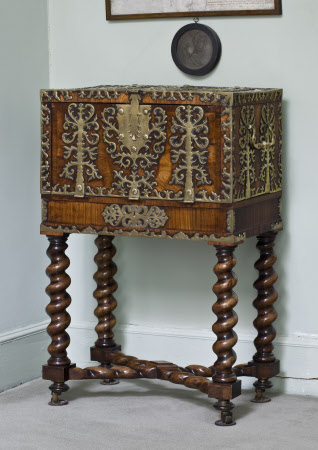 An oyster-veneered kingwood strong-box, Anglo-Dutch, last quarter of the 17th century. On a later - probably late 19th century - stand, European. The strong-box of rectangular form with brass stylized floral strap mounts and inlaid with oyster and geometric kingwood designs. The hinged top and fall front enclosing a part-fitted interior with a drawer and with a brass lock plate and carrying handles to the sides. With an unusual brass-mounted apron. On a 19th century walnut barleytwist support stand with cross stretchers and castors. A very similar strong box - also on a later stand - is at Ham House (NT 1139751). For a similar example see: Property of the 14th Earl of Kintore & The Collection of the Late Bernard Lyons, C.B.E. 18 March 2009, Christies, London Lot 180.