The Congress of Vienna Chairs (Hardenberg) 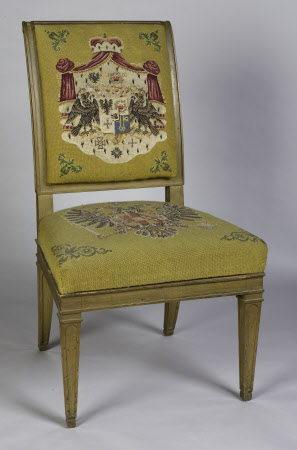 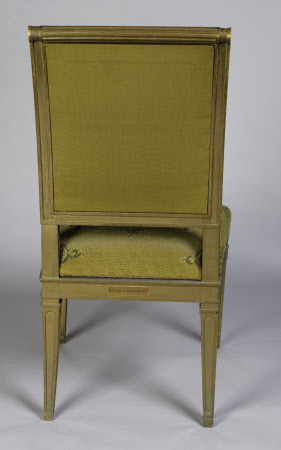 One of a set of twenty-two neo-classical chairs traditionally associated with the Congress of Vienna, 1814-15 (NT 1220560.1-22), the present one being one of two later additions made in 1933 (the other one is NT 1220560.15). All chairs are upholstered and covered with pale yellow wool with silk embroidery, delineating the coat-of-arms of each of the principal delegates to the Congress (on the back) paired with the country, which they represented (on the seat). The present one bears the arms of Prince Karl August von Hardenberg (1750-1822), accidently paired with those of Austria rather than Prussia. Hardenberg was Foreign Secretary and later Chancellor of the Kingdom of Prussia.

The birch frames of the copies were decorated with bronze paint, while the original chairs, made of beech, are gessoed and covered with gold leaf, the gilding being burnished on the raised elements and left matt elsewhere. In addition, two matching armchairs were also made in 1933, one with the Londonderry arms (NT 1220582) and one with those of Prime Minister Ramsay MacDonald. The copies were made by William Gibson, estate joiner at Mount Stewart. Although according to family tradition the chairs were a gift to Viscount Castlereagh, British Foreign Secretary at the Congress, it remains unclear whether they were part of the furniture supplied to the Imperial palaces and the Chancellery for the Congress, of, if in fact they were directly acquired by Castlereagh or his brother, Lord Stewart, British Ambassador to the Austrian Empire, for entertainment at the British Embassy at Palais Starhemberg. The Mount Stewart chairs are certainly very similar in design and proportions to a set supplied for the Audience Chamber of Empress Caroline Augusta, fourth wife of Emperor Francis I of Austria, in 1816 (Hofmobiliendepot, Vienna). Both the Imperial chair-maker Gregor Nutzinger and the upholsterer Michael Remele are likely candidates to be the authors of the chairs of the Empress, and indeed those at Mount Stewart. During extensive conservation work carried out on the set in 2015-16, two back and seat panels were found, as well as small fragments and threads of malachite green silk were found attached to some of the upholstery nails, indicating the colour of the original top covers. The original plain herringbone-ribbed Green silk was found on the chairs of Wessenberg and Stackelberg (NT 1220560.16 and 1220560.18), a plane Green silk seat on the chair with the arms of Castlereagh (1220560.8) as well as a later green damask on those of the marqués de Labrador (NT 1220560.21) and Prince Metternich (NT 1220560.1). It was Edith Vane-Tempest-Stewart, wife of the 7th Marquess of Londonderry, who around 1930 decided to recover the Congress of Vienna chairs with the arms of the delegates as depicted in the famous print after Isabey (NT 1220029). According to family tradition, the needlework was thought to have been carried out by nuns in Nantes, France, famous for their fine clerical embroideries. An almost complete set of invoices exists at the Public Record Office of Northern Ireland (PRONI), which reveals that Monsieur L. Legros (‘Broderies d’Art, Reproductions et Réparations d’Ancien’) oversaw the production of the new seat covers. Based in Nantes, Legros’s workshop may well have collaborated with the local order of the Visitation Sainte Marie de Nantes. To assist posterity in identifying, which arms belonged to which delegate, Lady Londonderry commissioned labels from E. L. Lehmann of 116 Wigmore Street, London, which were to be attached to the back seat rail of each chair. The labels follow the convention of Isabey’s print, which renders all surnames in combination with French styles and titles. In contrast to the print, however, the labels, such as they survive, are riddled with mistakes: ‘Comte Alexis de Noilles [sic]’, ‘Prince Matternich [sic]’, Baron de Wessemberg [sic]’, Prince Hardinberg [sic]’ and ‘Comte de Stackelburg [sic]’. On 22 June 1932, Lady Londonderry’s secretary wrote to Mr Lehmann, pointing out that there was ‘a mistake in the spelling of the table for Comte de Stackelburg’ and that she was ‘returning it for alteration.’ It is conceivable that Lehmann got it right in the first place. A comparable large suite of neo-classical gilt-wood chairs is at the château de Valencay, in the Loire Valley, embroidered by exiled ladies of the Spanish Court between 1808 and 1813, with a pattern of natural leaves found in the gardens surrounding the château. Valencay had belonged to Talleyrand and, rather like Mount Stewart, abounds in vestiges of the Congress of Vienna. (Entry adapted from Christopher Rowell and Wolf Burchard, ‘The British Embassy at Palais Starhemberg: Ambassadorial Furniture from the Congress of Vienna at Mount Stewart’, Furniture History, LII, 2017)

Label attached to the backrail of the chair: The label reads: 'Prince de Hardinberg [sic]'