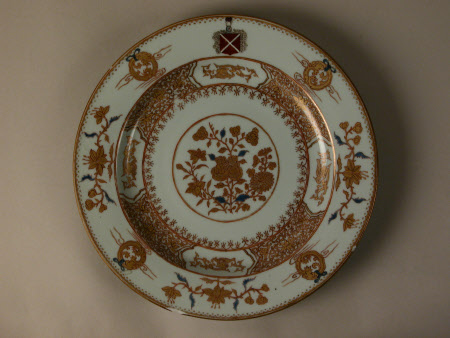 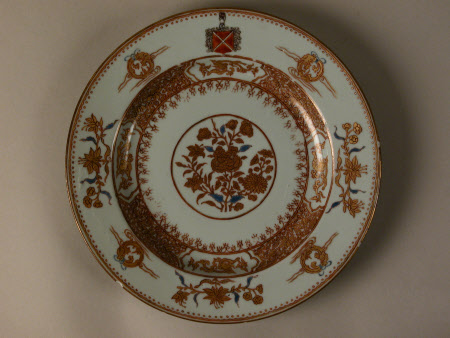 One of two armorial plates (second and third course, this being the smaller), porcelain, painted in rouge de fer (iron-red), blue and other enamels, and gold, the rim with the arms of Cowan, China, Jingdezhen, Yongzheng period, circa 1730-35.

These plates were ordered by Sir Robert Cowan (d. 1737), merchant and later Governor of Bombay, who worked for the East India Company in India from 1719 to 1735. According to Angela Howard, Heirloom & Howard Ltd, they were probably part of an order that included the two tea canisters (1220257.1-2), which have the same coat of arms and are similar to the larger service (1220252), ordered in 1722. The tea canisters and these plates were perhaps ordered during Cowan's visit to Canton in 1733. The design of the coat of arms is possibly based on a seal matrix set in a ring worn by Cowan. His sister, who inherited his estate, married Alexander Stewart in 1737.