The Transfiguration (after Raphael) 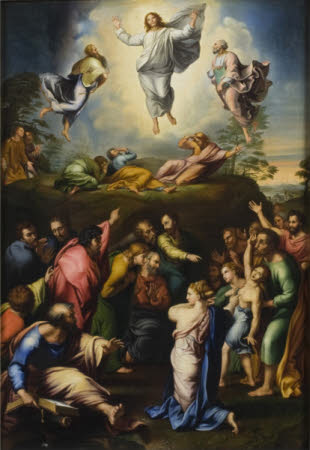 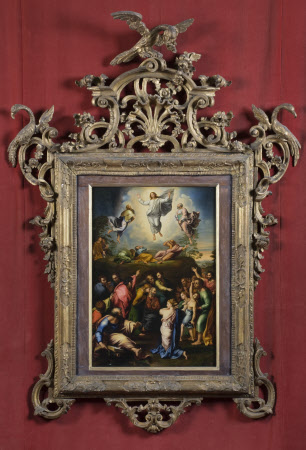 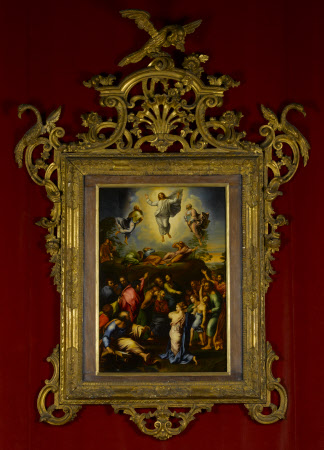 Viscount Castlereagh had organized for the return of many worksof art to the Vatican after Napoleon's defeat, which included Raphael's famous painting. This copy is possibly by Sir Thomas Lawrence, undertaken in 1815 whilst the artist was in Rome painting the portrait of Pope Pius VII now hanging at Windsor. It was given to Viscount Castlereagh as a gift by Lawrence.

Oil painting on panel, The Transfiguration (after Raphael) by Sir Thomas Lawrence, PRA (Bristol 1769 - London 1830). It has been suggested that this is the copy that Lawrence is recorded as making of Raphael’s picture from the Vatican in Paris in 1815 but there is no sign of, nor evidence for, this. Its somewhat metallic handling and bright colouring suggest rather some German artist, close to the Nazarenes. He is also recorded as having made a pastel/crayon copy in his youth, 1782 from the Hamilton collection which he submitted to the Society of Arts (1784), sold in his posthumous sale, Christie's, London, 21 May 1830 (Garlick 1964 , pp. 256-7) which came up in an Anon. sale at Sotheby's London, 12 March 1987 (29), 74 x 118 cm. It is in an earlier frame that previously was used on a painting by Bellini that hung in the same location. The Bellini hung at Londonderry House on the landing above the grand staircase and was moved to Mount Stewart during the Second World War. It remained a Mount Stewart until it was sold c. 1970s. The frame was re-used, with the addition of a plain slip, on the Lawrence Transfiguration which currently hangs over the altar Chapel, and which hung on the West wall of the Chapel in 1949.

Possibly the copy that Lawrence is recorded as making of Raphael’s picture from the Vatican in Paris in 1815; Given to Viscount Castlereagh as a gift by Sir Thomas Lawrence, PRA (Bristol 1769-London 1830) thence by family descent to Lady Mairi Bury (1921-2009) by whom given to the National Trust in 1976