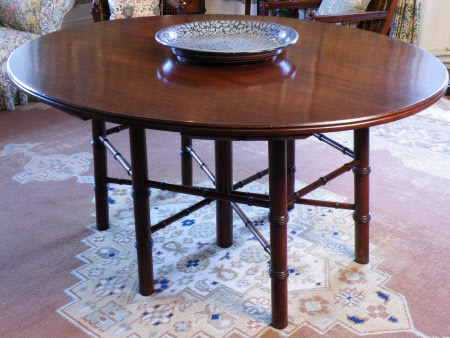 A mahogany centre table, designed by Philip Webb for Morris & Co., circa 1870. The oval top with a moulded edge and raised on six simulated bamboo turned legs joined midway by similar spindle stretchers and with a further lower level of stretchers radiating from a central turned column. A very similar table, but circular, is illustrated in John Andrews 'Arts and Crafts Furniture', 2005, plate 45 and another in Linda Parry 'William Morris', V&A exhibition catalogue, 1996, plate J 22. This catalogue also shows an example in the Sitting Room of The Grange (Burne-Jones residence) in Fig. 75.

Philip Webb (1831-1915) was born in Oxford and trained in the offices of G.E Street, the prolific Victorian architect. Here he met William Morris and struck what became a life-long friendship. He designed The Red House for Morris and out of that project the firm of Morris, Marshall, Faulkner & Co. was born, for whom he designed furniture. Alongside this, he ran his own architectural practice. For most of his architectural commissions the furnishings were provided by Morris & Co. In 1877, he became a founder member, with Morris, of The Society for the Protection of Ancient Buildings (SPAB).