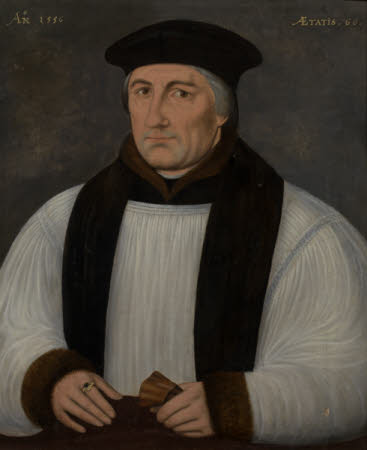 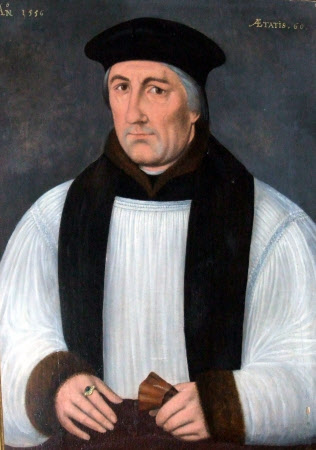 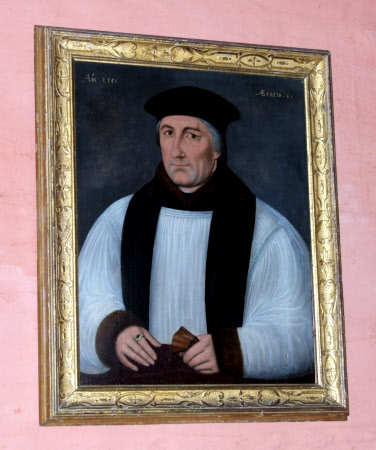 Oil painting on panel, Stephen Gardiner (1483 – 1555), aged 60, British (English) School, grey background is inscribed: AN 1556 - AETATIS 60. A half-length portrait of a man turned slightly to the left, gazing at the spectator, short grey hair, wearing a rochet with a black tippet and black square cap. Full-sleeves of the rochet are trimmed with fur at the wrist and at the throat. Ring on index finger of right hand. Reputedly the son of a cloth-maker of Bury St. Edmunds, Stephen Gardiner (born between 1483 and 1490, d.1555) was educated at Trinity Hall, Cambridge, of which he became Master in 1525, having previously been tutor to a son of the Duke of Norfolk, and Wolsey’s private secretary. Active against heretics and in promoting Greek studies (befriending Erasmus), he was sent on several diplomatic missions to France and Rome by Henry VIII. From 1531 to 1550 he was Bishop of Winchester; he gained supreme political influence after the fall of Cromwell and inspired the Six Articles in 1539. Chief opponent of the doctrines of the Reformation, he was committed to the Tower by Edward VI in 1548 and deprived of his bishopric in 1550. Despite his having been sent to Rome by Henry VIII between 1527 and 1533 to further the King's divorce from her mother, Catherine of Aragon, Mary Tudor released him and restored him to the See of Winchester, to the Chancellorship of Cambridge, and to the Mastership of Trinity Hall, and made him Lord Chancellor in 1553, after which he became a zealous persecutor of non-Catholics, yet was instrumental in securing the retention of the property of the dissolved monasteries by their lay owners. Bishop of Winchester, 1531-1553-5. Like Sir Henry Bedingfeld, a Catholic supporter of Queen Mary, who made him Lord Chancellor in 1553. A zealous persecutor of Protestants, including Princess Elizabeth, whom he declared illegitimate.