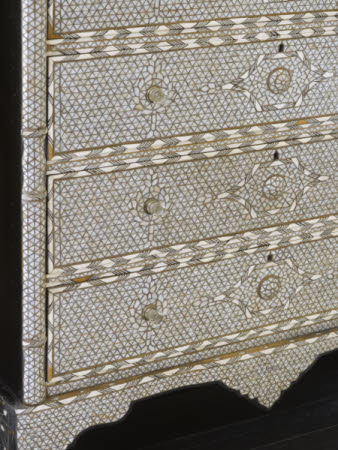 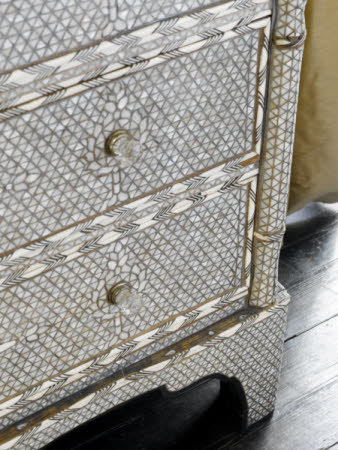 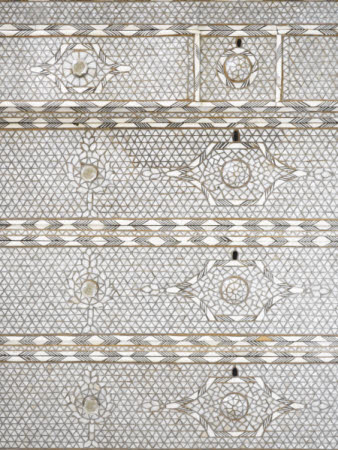 A mother-of-pearl, bone and hardwood chest of drawers, Syria, probably Damascus, circa 1900. The top and sides of ebonised hardwood, the front covered in shards of mother-of-pearl and shell in wire borders. The mouldings between the drawers of bone-covered wood in a chevron pattern. The drawers all with central raised boss and glass drawer pulls. On a bracket plinth with shaped aprons.

Mother-of-pearl has been used for millenia by craftspeople in the Levant. In Damascus, a typical expertise developed in the making of furniture and boxes. In 1822, in the book ‘Universal Geography’, Conrad Malte-Brun wrote that, in Damascus, ‘the cabinet-work of fine wood, adorned with ivory and mother of pearl has excited the admiration of the Europeans’. By the late 1920s, when Agatha Christie Mallowan (1890-1976) first visited Syria, furniture was being made in European forms for tourists and visitors. This may be the chest of drawers that Christie describes buying in her autobiography: ‘Already in those days the inlaid wooden boxes and tables had become stereotyped and universally reproduced. Still done by hand, but in conventional patterns and ways. I also bought a chest of drawers. A huge one, inlaid with mother-of-pearl and silver. The sort of furniture that reminds one of fairyland.’ She may have purchased another for she bequeathed ‘my Damascus pearl inlay chest of drawers with the name Agatha Christie inlaid on top’ to her agent and friend Edmund Cork in her will. Christie travelled to Syria several times and accompanied her husband, the archaeologist Max Mallowan (1904-78), on digs at Tell Halaf and Tell Brak. Furniture decorated with mother-of-pearl is still made in Syria today, although the number of craftspeople able to practise this art is thought to have been drastically reduced by war and conflict in the region. (Megan Wheeler, August 2020)