Christians Bringing Gifts to the Apostles 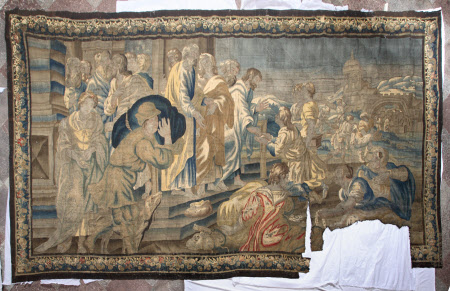 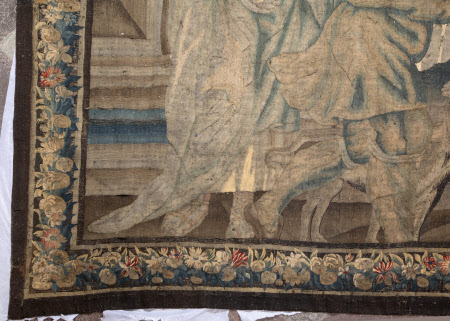 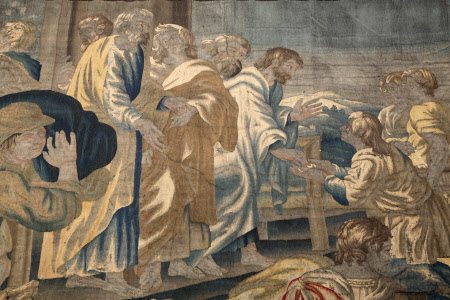 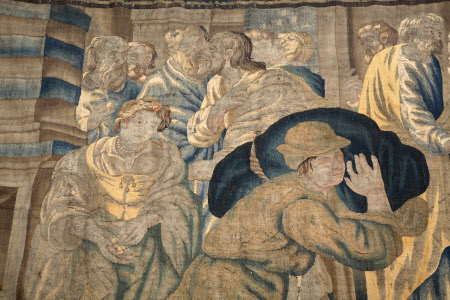 Tapestry, wool and silk, 4 warps per cm, Christians Bringing Gifts to the Apostles from a set of three Acts of the Apostles, possibly after Abel van Reghelbrugghe, Oudenaarde, after a design by Abraham van Diepenbeeck, c. 1670-1690. The Apostles stand in a group on a raised platform on the left, with figures approaching from the right bringing gifts including money and jewellery. In the left foreground a man carries a large blue sack on his shoulder, and an unusual dog stands behind him, whilst in the right foreground women count money and necklaces. In the background on the right two figures carry the body of Ananias wrapped in a cloth towards a hole being dug by two more men, and in the distance on the right is the gate of the city of Jerusalem with a domed building beyond. The narrow borders are made up of closely bunched leaves and flowers on a dark brown ground. An irregularly shaped section has been cut out from the tapestry at the lower right, perhaps to make way for a fireplace, and either side of this are older vertical slits, the one on the right now sewn up but the one on the left still open.

The subject of the tapestry is taken from chapters 4 and 5 of the New Testament book of the Acts of the Apostles. The early followers of the Apostles believed that they did not own their possessions but held all things in common, and they brought what they had to the Apostles to be distributed to each according to his need. Those who owned land or other goods sold them and brought money (Acts, 4.32-37). A certain man named Ananias sold his possessions but only brought part of the money to the Apostles, with the knowledge of his wife Sapphira. Peter asked Ananias why Satan had filled his heart and told him to do this, telling him that he lied not to man but to God. On hearing this Ananias fell down dead, and some young men took him out and buried him – the scene in the background of the tapestry. Soon afterwards his wife Sapphira appeared and she too was struck down dead and buried (Acts, 5.1-10). The three tapestries at Speke, 'Christians bringing Gifts', and the two halves of 'The Sacrifice at Lystra', come from a larger series of the Acts of the Apostles, the subjects drawn from the New Testament book of that name. The series was designed and made in Antwerp in the last quarter of the seventeenth century, Henry Marillier has identified a total of ten subjects in this series: 'Christians Bringing Gifts to the Apostles', 'The Beautiful Gate', 'St Paul Escaping from Damascus', 'St Philip Baptising the Eunach', 'The Conversion of St Paul', 'The Shipwreck at Malta', 'St Paul Delivered from Prison by the Angel', 'Christ's Charge to Peter', 'Paul Preaching at Athens' and 'The Sacrifice at Lystra' (Marillier 1930, pp. 4-6). The 'Acts of the Apostles' series was clearly inspired by the celebrated series of the same subject designed by Raphael for Pope Leo X in 1515-16. Raphael's 'Acts' were probably the most famous tapestry designs in the world in the seventeenth century and were still extremely popular, with numerous workshops in the Southern Netherlands, France and England weaving versions of the designs. The present series was probably conceived to capitalised on the popularity of Raphael's 'Acts', and in fact some of the scenes re-use Raphael's designs with little alteration, whilst others are new. The designer of the series is identified in a letter of 1676 as Abraham van Diepenbeeck (1596-1675), an Antwerp artist who worked extensively as a tapestry designer for Philip Wauters, who produced the 'Acts' tapestries, and his brother Michiel (Denucé 1931, p. 199). Van Diepenbeeck's preparatory drawing for 'Christians Bringing Gifts to the Apostles' is in the British Museum (Steadman 1974, pp. 48, 63). The Speke 'Acts' tapestries relate to a number of examples of the same designs which bear the 'PW' monogram of the Antwerp tapestry entrepreneur Philip Wauters (fl. 1660-1679). These include tapestries in Westminster Abbey, Boughton House and Parham Park, as well as further examples listed by Marillier. The correspondence of the Wauters and firm mentions sets of eight 'Acts of the Apostles' tapestries in 1674, 1675, 1676 and 1682 (Denucé 1931, pp. 189, 195, 196, 199, 211), and a set of eight cartoons for the series was listed in Michiel Wauters's will in 1679 (Denucé 1932, p. 302; Crick-Kuntziger 1935, p. 36). However the Speke tapestries differ from these examples in that their designs are reversed, the borders are of a different, simpler type, and their weave is significantly coarser than the tapestries signed by Philip Wauters. A clue to the origin of the Speke tapestries comes from two tapestries in the National Museum of Art of Romania, ‘Christians Bringing Gifts’ and ‘The Sacrifice at Lystra’, which are also reversed in relation to the Wauters weavings. One of these bears the signature of Oudenaarde tapissier Abel Reghelbrugghe (1624-1694), followed by the date 1664. Although Reghelbrugghe was based in Oudenaarde his family had close links with Antwerp, where his father acted as a tapestry merchant, and De Meûter suggests that some of the Reghelbrugghe family’s tapestries may have been produced in Antwerp (De Meûter et al. 1999, pp. 199-201). Although they are not signed, the relationship of the Speke tapestries to the two pieces in Romania suggests that they may also be linked to the Reghelbrugghe family. Their relatively coarse quality – 4 warps per cm, as opposed to 6 warps per cm for the pair in Romania – may suggest production in Oudenaarde rather than Antwerp. There is a set of four 'Acts of the Apostles' tapestries, this time almost certainly made by Philip Wauters in Antwerp, in the National Trust's collection at Great Chalfield Manor (nos. 539493, 539494, 539495, 539496). It is not known when the 'Acts' came to Speke, but they had arrived by 1907 when they appear in a photograph of the Tapestry Bedroom (no. 1196079.22.1). They are recorded in a 1917 inventory of the house. Both photograph and inventory indicate that one of the tapestries had been cut to fit round a fireplace. In his discussion of the 'Acts of the Apostles' series in 1930 Henry Marillier said that 'two other unverified pieces are said to be at Speke, in Lancashire, one of which is the doubtful No. 10, Paul and Barnabas at Lystra. The other is No. 1 [Christians Bringing Gifts].' (Marillier 1930, p. 6). This description implies that the 'Sacrifice at Lystra' had not yet been cut into two pieces. In a 1964 inventory the tapestries are mentioned hanging in the Oak Bedroom at Speke. (Helen Wyld, 2012)