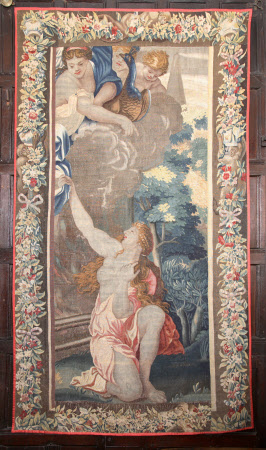 Tapestry, wool and silk, 7-8 warps per cm, Psyche and Juno from a set of three of the Story of Psyche, Flemish, c. 1660-1680. Psyche kneels in the foreground, red hair flowing over her shoulders and wearing a red robe. She holds one hand to her breast and with the other reaches up to grasp at a piece of blue cloth that seems to belong to the goddess Juno, who looks down from the clouds and gestures with one arm. Juno is accompanied by a peacock and two putti. Beside Psyche at the lower left there is part of a stone plinth, and on the right there is a wooded landscape with a pyramid or obelisk near the top. The tapestry has borders of flowers, ribbons, pots and monkeys on a dark brown ground, but these have been sewn on and are probably not all original to the main scene, as parts of them have a higher warp count.

The peacock in the sky is an attribute of the goddess Juno, the queen of heaven. After Cupid abandoned her Psyche wandered the earth looking for him. She came to a temple of the goddess Ceres, but Ceres was unable to help her; next she arrives at a temple of Juno, and the same happened. The tapestry may represent Psyche pleading for aid from Juno, and Juno refusing. Finally Psyche realised that she had to serve Venus, and after subjecting her to various trials Venus reunited her with Cupid. The tapestry may originally have been larger and included more figures.