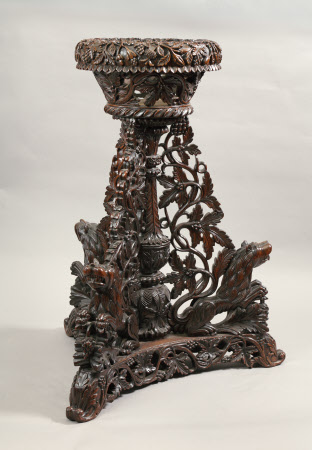 One of the triumphs of Victorian carving at Speke Hall is this highly ornate plant stand. Its tripod form is intricately hung with vine trails from which three fierce lions leap out.

A carved hardwood jardinière, Anglo-Indian School, mid-19th century. Rosewood, possibly padouk, with a circular bowl carved with grapevines and scrolling foliage, supported on a spreading triangular base with ornately carved central urn, pierced scrolling vine leaves and grapevine borders to three passant lions, scroll feet. Anglo-Indian is a term given to 18th- and 19th-century furniture and decorative objects made by local cabinetmakers in India for the British colonial market.