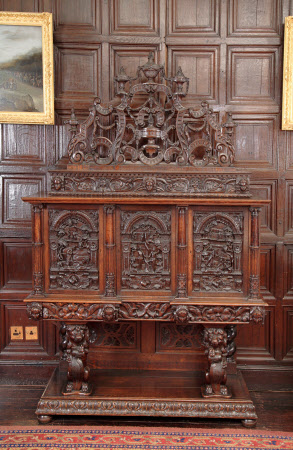 circa 1850 (with earlier elements)

Early carved panels telling the story of Adam and Eve were imported from the Continent to make into three doors for this glorious oak cabinet. It was supplied by Wrights of Wardour Street, a London firm specialising in producing such pieces in the 1840s and 50s to satisfy a voracious market for neo-Renaissance furniture.

An oak and walnut side cabinet, probably Belgian, mid 19th century incorporating earlier carvings and panels. With three cupboard doors carved in relief with scenes of Adam and Eve, separated by fluted Ionic columns resting on a carved breakfront frieze with three drawers; two supports carved as rampant lions holding scrolls, on a carved undershelf and bun feet. Surmounted by a pierced and carved cresting of scrollwork, strapwork and urn-shaped cressets.