attributed to Gillow of Lancaster 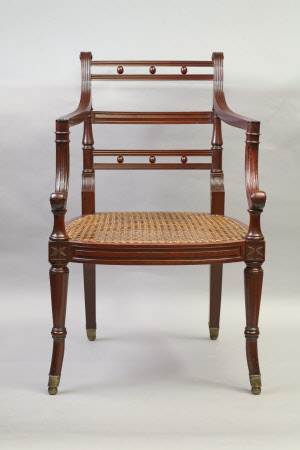 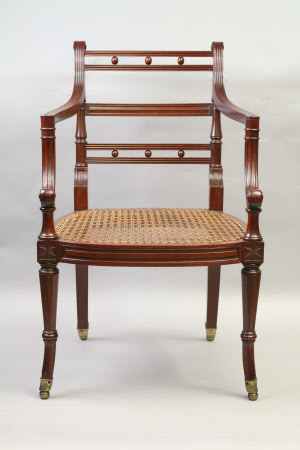 A pair of mahogany open armchairs, attributed to Gillows of Lancaster, circa 1800. Each with a double reeded top rail separated by turned spheres, narrow horizontal stretcher and a further conforming double stretcher below. The caned seat raised on splayed turned legs, star motifs to the seat rail and terminating on brass cap feet with brass spheres. Stamped: 'L.G.N. STARKIE' to the back rail.

Le Gendre Nicholas Starkie (1799 – 1865) was an English landowner and politician who sat in the House of Commons from 1826 to 1830. He inherited a large amount of land in central Lancashire, including Huntroyde Hall, after the early death of his elder brother. Starkie bought Ashton Hall, Lancashire from the Dukes of Hamilton in 1853. He was also Provincial Grand Master and Grand Superintendent of the Freemasons of West Lancashire from 1827 till his death. The Watt and Stakkie families were related by marriage and Miss Adelaide Watt (1857-1921) was a frequent visitor to Ashton Hall.There is a small group of furniture firmly attributed to Gillows in the Speke collection but it is unclear how it came to the house. The stamp on these armchairs is the only obvious connection between the two families although these chairs pre-date the remaining Gillow furniture by 25 years and the later furniture pre dates the restoration of the Hall by a further 25 years. It is therefore unlikely that the furniture was commissioned by Richard Watt V (d.1865) who saved Speke from near ruin in the 1850s.The Lancashire Starkie connection seems to be the most plausible source of the group and if correct it can therefore be assumed that the commission originally came from the workshops of Gillows of Lancaster rather than Gillow & Co. London.(James Weedon 2019)

Possibly commissioned by the Starkie family c.1800 from Gillows of Lancaster. Transferred to the Watt family at Speke Hall before 1921. Speke Hall and its contents were bequeathed, as a secondary devise, to the National Trust by Adelaide Watt (d.1921) in 1943. Speke was initially bequeathed to the Norris family (who built the original house during the 16th century). It was then leased to Liverpool City Council and later to the Museums Department of Merseyside County Council. The National Trust took over direct management of the house and its contents in 1986.