attributed to Gillow and Co 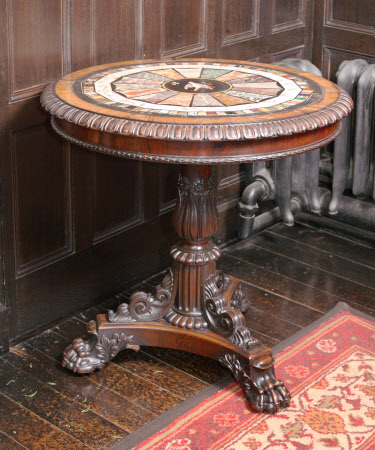 A rosewood pedestal table with a specimen marble and pietra dura inlaid top, the base attributed to Gillows of Lancaster or Gillow & Co. London circa 1825. The inset marble top with a circular pietra dura panel depicting a bird and butterflies within a radiating design of marble specimens, set in a carved ovolo border. The top raised on a lappet carved turned column with gadrooned collar and fluted lower column, the triform base with scroll carved brackets and raised on lion's paw feet.

Specimen marble tops were typical purchases of a grand tour, bought back from Italy by the British aristocracy in the late 18th and early 19th centuries. The tops where often supplied with English pedestal bases and Gillow are recorded as making two such bases for Stephen Tempest of Broughton Hall circa 1820. The profuse carving and the choice of rosewood as the principal timber made these stands expensive with Tempest paying Gillow & Co. London £47.0.0d. These are illustrated in Stuart, Suzan 'Gillows of Lancaster and London, 1730-1840', vol.I, p.337, pl.391. The carved base reflects the use of bold high relief carving which can be seen on furniture produced by Gillows in the 1820s and 1830s. Similar carving can be seen on the tables sold Christie's Belton House, Lincolnshire (The property of The Lord Brownlow), 30 April - 2 May, 1984, lot 90 and Sotheby's London, 17 November 2010, lot 194. For a writing table attributed to Gillows with very similar carved detail see Speke Hall collection (NT 1195724). (James Weedon 2019)