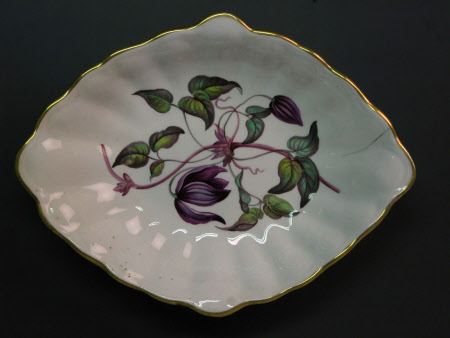 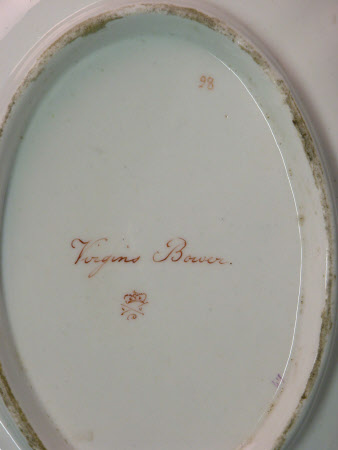 The Derby factory originated in 1756 when John Heath (a banker), Andrew Planche (a ‘china maker’) and William Duesbury (an enameller) became partners in a factory producing soft paste porcelain. The factory found quick success and the business grew when they also acquired the porcelain works at Chelsea. On the whole, production of pieces happened in Derby but were then moved to London for decoration and onward sale. This dish is an example of botanical decoration that began to be painted on Derby porcelain from 1791 when William Duesbury purchased the rights to some plates from William Curtis' 'The Botanical Magazine', a monthly periodical that featured hand-coloured plates. In around 1795-6, the factory also acquired a copy of John Edwards' 'A Collection of Flowers drawn after Nature & disposed in an Ornamental & Picturesque Manner' which included printed and hand-coloured etchings by Edwards. This decoration was largely applied to items intended for serving dessert. The addition of the common name for each plant on the underside had an educational objective but also added to the collectable interest of the pieces; many people ordered or acquired sets depicting whole series of botanical engravings. This particular dish is based on an engraving of Clematis Virginiana or ‘Virgin’s Bower', a native plant of North America, first published in November 1805. The original print design was painted by Edwards, engraved by Francis Sansom and published by T. Curtis of St George Crescent. It was listed as plate number 887, though appears on this Derby plate as their design number 98 (painted in red) and 47 (painted in puce). Alongside the design number and plant name painted onto the underside of the dish is the Derby factory mark. This depicts a crown – alluding to the Royal Warrant granted from King George III to the factory in 1775 which appointed William Duesbury and John Heath 'Derby China Manufacturers to His Majesty.' This mark was painted in red, as on this dish, on wares decorated from 1806 -1825. (Alison Cooper, 2018)

'Virgin's Bower.' in puce with painted crown above crossed batons and 'D' below