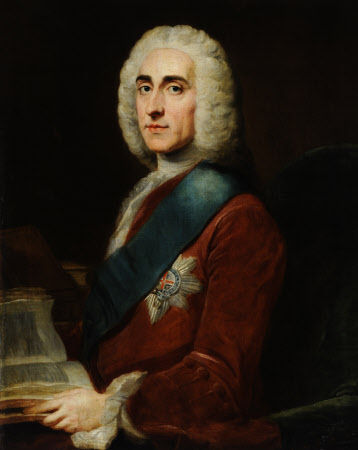 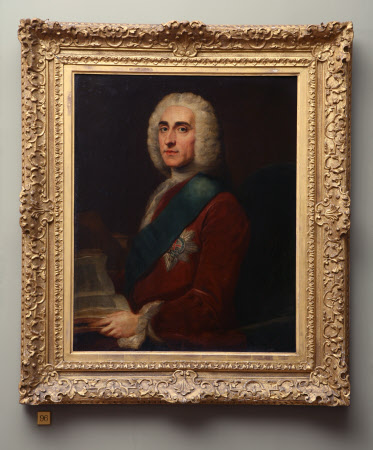 Philip Dormer Stanhope said of himself “I am neither of a melancholy nor a cynical disposition, and am as willing and as apt to be pleased as anybody; but I am sure that since I have had the full use of my reason nobody has ever heard me laugh”.

Oil painting on canvas, Philip Dormer Stanhope, 4th Earl of Chesterfield KG, PC, MP (1694-1773) by William Hoare of Bath, RA (Eye 1707 – Bath 1792). A half-length portrait, turned to the left, gazing at the spectator, wearing the Order of the Garter. Statesman and author of the famous Chesterfield Letters attempting to instill good breeding in his natural son.

Another version of this work of identical size, described as 'After William Hoare' c.1742, is in the collection of the National Portrait Gallery (158); it has been suggested this example may be an early copy from an original once at Stowe. Another similar version (without the book) is at Trinity College, Cambridge and also described as 'After William Hoare'. The Beningbrough work is described (again as a copy) in H. A. Tipping, 'English Homes Period IV, vol II' (1928), p 337. See also NT 1191212 for another portrait of the same subject also at Beningbrough.

Purchased from the sale of the contents of Beningbrough in June 1958, Curtis and Henson, lot no 1157 following the death of Lady Chesterfield; purchased for the National Trust for £189. This work also appears to have been previously sold as Lot 758 at the 1910 sale of Holme Lacy nr Hereford, the former home of Lord and Lady Chesterfield. It was bought for 105 gns by a Mr Graham who may have been an agent working on behalf of a member of the family (as is known to have been the case with other Holme Lacy items).