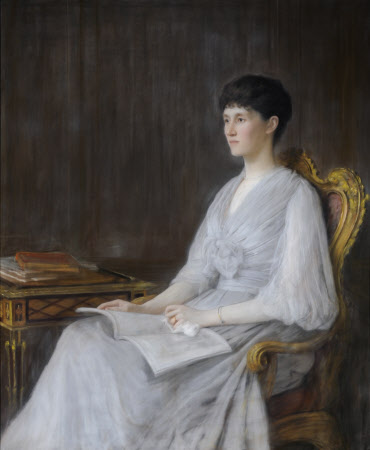 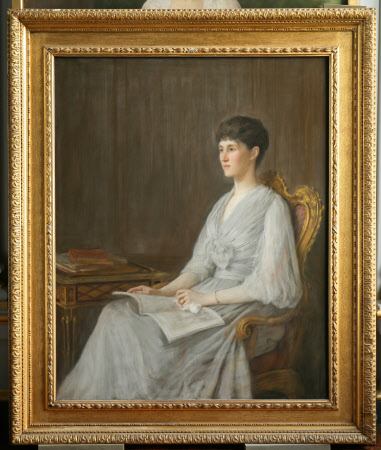 Lady Victoria brought fun Beningbrough, her four children were allowed to skate on the pond in winter, present plays in the Hall, play shuttlecock in the gallery and toboggan down the main stairs!

Pastel painting on canvas of Lady Victoria Alexandrina Elizabeth Grey, Lady Dawnay (b.1853 - d.1922). Dated 1890. A three-quarter-length portrait of a woman, turned to the left, gazing to the left, seated with an open book on her lap.

Victoria was the daughter of General Charles Grey (1804-70), Private Secretary to Queen Victoria, and Caroline Eliza Farquhar (1814-90). A grandaughter of Prime Minister Charles Grey, 2nd Earl Grey (1764-1845), she was given the honorary title Lady Victoria in 1895 after her older brother, Albert, became 4th Earl Grey. She married Col. Lewis Payn Dawnay in 1877. Lewis Dawnay inherited Beningbrough in 1891 and he and Victoria continued to live part of the year there until his death in 1910, when it passed to their eldest son, Guy Dawnay.

Gift of G.V.R.Grant, son of Margaret Dawnay and Rev. Arthur Rowland Grant. Margaret was one of the four children of Col. Lewis & Lady Victoria Dawnay and lived at Beningbrough until her marriage in 1908. Margaret is likely to have inherited the portrait upon the death of her mother, Lady Victoria, in 1922. Previously it may have hung at the family's London address; 51 Charles Street, Berkeley Square.