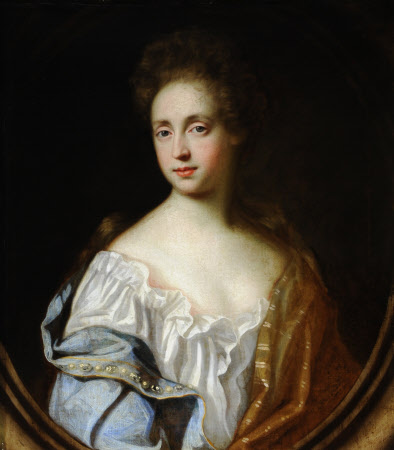 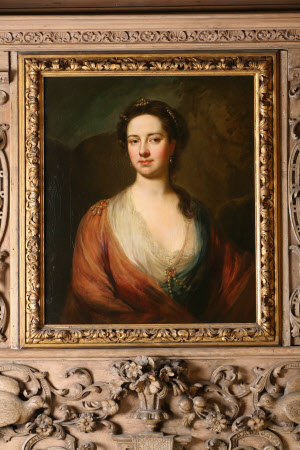 Oil painting on canvas, English School, circa 1750. A half-length portrait of a woman, turned slightly to the right, head turned slightly to the left, gazing at the spectator, her brown hair dressed with pearls, wearing low-cut chemise under a blue dress, with a light brown wrap-over cloak or coat with a jewel with pearls at the breast and on her right shoulder. In the 1958 Beningbrough sale catalogue, this and a pair (NT: 1191140) are identfied as 'Elizabeth, wife of Henry Mackworth', and 'Julianna Dolben'. It is unclear which work is which and these identifications may be based upon a confusion at the time with similar works in the 1910 sale catalogue for Holme Lacey, previous home of Lord and Lady Chesterfield. In this case, the works are either unknown members of the Bourchier family, or anonymous portraits purchased by the Dawnay family in 1892.

Either purchased or simply restored by Lewis Payan Dawnay in 1892 and hung in the Drawing Room at Beningbrough - they can be seen in Country Life images from the early 20th century. Later included in sale of contents of Beningbrough held by Curtis & Henson, June 1958, lot 1127, as one of “A pair, half length portraits of Elizabeth, wife of Henry Mackworth, and of Julianna, wife of Sir John Dolben Bt., (in ovals)” ‘by or attributed to’ Sir Godfrey Kneller". Pair purchased for transfer to the National Trust for £115/10. See also NT: 1191140