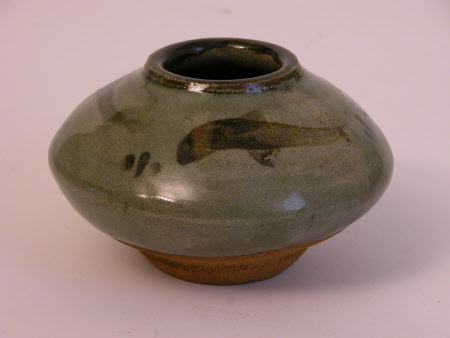 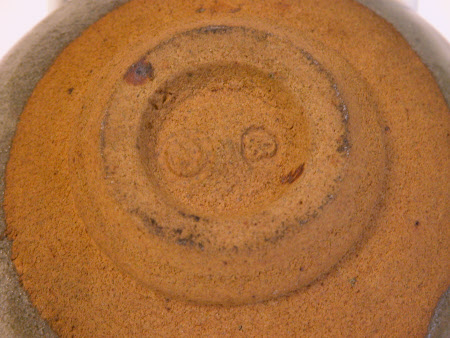 Small, squat, wheel-thrown, globular, stoneware, footed vase by Katharine Pleydell-Bouverie while at the Cole Pottery, Coleshill (now Oxfordshire), made between 1925 and 1946; covered in grey/green glaze, iron rim and painted with iron fish, toasted unglazed lower exterior; impressed personal and pottery marks to base, also incised and painted body and glaze codes to inside of foot rim.

Katherine Pleydell-Bouverie's upbringing was one of privilege as she grew up in a 17th-century stately home in Faringdon (then Berkshire), surrounded by items of Chinese porcelain. In the 1920s, she attended the Central School of Arts and Crafts in London where she met and was heavily influenced by the painter and critic Roger Fry as well as her pottery tutor Dora Billington. This was an experimental and exciting time for pottery at the Central school and Pleydell-Bouverie mixed with other noted potters and students including Alan Caiger-Smith and Ruth Duckworth. Pleydell-Bouverie became an early apprentice to Bernard Leach at St Ives, working alongside Shoji Hamada and apprentice Michael Cardew. When she left, she was able to start her own pottery on her family’s estate in Berkshire at Coleshill (now Oxfordshire) where this piece was made. Her pots show the evidence of Bernard Leach’s influence, particularly in the style of decoration. However, she also often experimented with different ash glazes, preparing them from wood or vegetable ash found on the estate. At Coleshill, all of her pots were wood fired. Unlike many of the pieces of studio pottery at Greenway, this pot dates to before World War II, showing that Rosalind and Anthony Hicks did not purchase it as a contemporary piece. Most of the rest of their collection was contemporary to them – made and purchased in the 1970s-1990s. This piece is only one of a small handful of pieces that the Hickses bought that dated to pre-war and was likely bought at auction or from a dealer. This suggests that the Hickses knew the importance of Pleydell-Bouverie’s place in the studio pottery movement and recognised the opportunity to add a piece by her to their collection. (Alison Cooper, 2018)