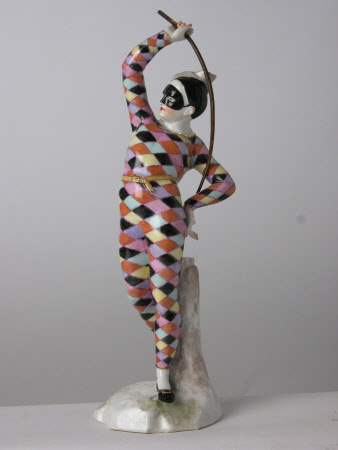 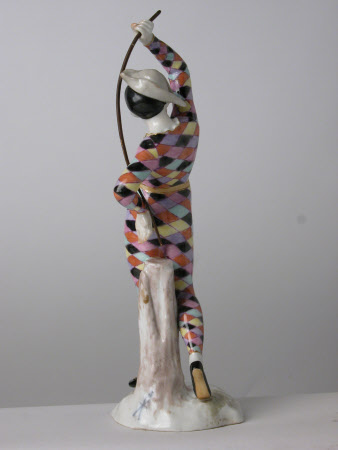 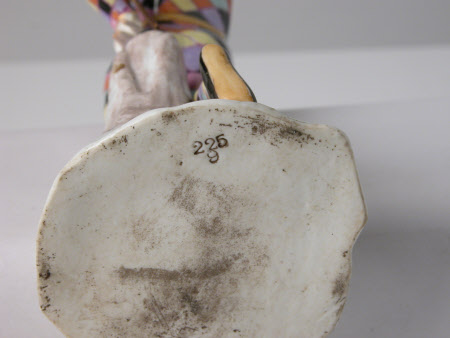 One of a set of six Samson Commedia dell'Arte figurines, late 19th century, with minor damage.

This set of figures was produced by the Samson factory in Paris which was established in 1845 by Edmé Samson, a famous copyist of pottery and porcelain. He produced pieces inspired by and copied from the work of famous factories including Chinese export porcelain, Meissen, Sèvres, Chelsea, Derby and all the major factories of England, France and Germany, as well as tin-glazed earthenware or faience. This figure represents the 'Harlequin' character from the Commedia dell'Arte, the popular improvised comedy which flourished in Italy from the 16th to the 18th centuries and influenced theatre throughout Europe, especially France. Harlequin was the best-known of the comic servant characters and is recognisable by his distinctive chequered costume. This figure of ‘Harlequin’ is said to have been Agatha Christie's inspiration for the series of short stories published in 1930 under the title 'The Mysterious Mr Quinn' in which Mr Quinn appears ‘by some curious effect of the stained glass…to be dressed in every colour of the rainbow'. Harley Quin is a mysterious character, who materialises and vanishes unpredictably. He helps his old friend solve crimes with hints and questions. 'Mr Quinn' was one of Christie's favourite characters. Quin appeared again in two other short stories: 'The Harlequin Tea Set' and 'The Love Detectives'. 'The Affair at the Victory Ball', a short Poirot story, includes a fancy-dress ball when the main characters dress as the Commedia dell'Arte, including the Harlequin.

F.A. Miller purchased the set from J.O.Donoghue in May 1881. Introduced to the Property by Agatha Christie Mallowan. Inventory taken just before the house was requisitioned by the War Department in 1942, p. 66.