The Reception of an Embassy 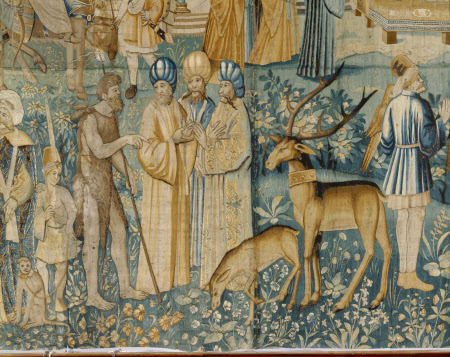 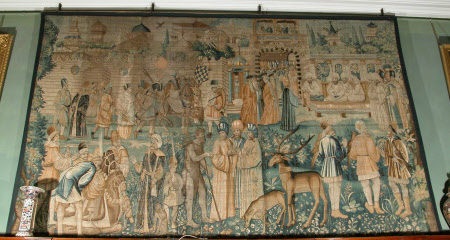 Tapestry, wool and silk, with painted additions, 5½ warps per cm

Tapestry, wool and silk, 5½ warps per cm, with painted additions, The Reception of an Embassy, Southern Netherlands, after an unknown Venetian artist, dated 1545. Figures are arranged in two planes before a city wall. In the upper right before the gates of the city a group of men in long robes and black hats is presented to a man in a turban sitting cross-legged on a couch. On the couch behind him are three more men, and to the right there is a larger group of men in turbans and tall fur hats. Another crowd of figures stands inside the city gate. Above the gateway is a banneret with a Latin inscription, and coats of arms hang at either side of the gate. To the left two men on horseback and armed men on foot approach in front of the wall. Above the walls can be seen the trees, rooftops and minarets of the city. In the left foreground a man is lifted onto a camel by attendants, watched by a man in a rich brocaded gown and a white scarf. Beside him is a small boy with a feather in his hat and a monkey on a leash. In the centre foreground a man dressed in animal skins and carrying a staff talks to three men in long robes and turbans. Beside them a stag and a hind graze on the leaves and flowers that fill the ground behind the foreground figures, and on the far right three men with falcons stand in a group. At the right edge of the tapestry is a tree with a scroll pinned to it bearing the date '1545'. The tapestry has no borders but a dark blue linen band has been applied around the edges. Beneath this part of a dark blue galloon can be discerned, suggesting that the tapestry was woven without borders. Repaired joins running the height and width of the panel are clearly visible. The outlines of the design have been reinforced with dark brown paint.

On a bannaret above the gateway: EX FERRO / FI[V]NT / QVE / DVRATVRA / PER EVVM On a scroll pinned to a tree on the right hand side: 1545