Demeter seated on a Funerary Altar 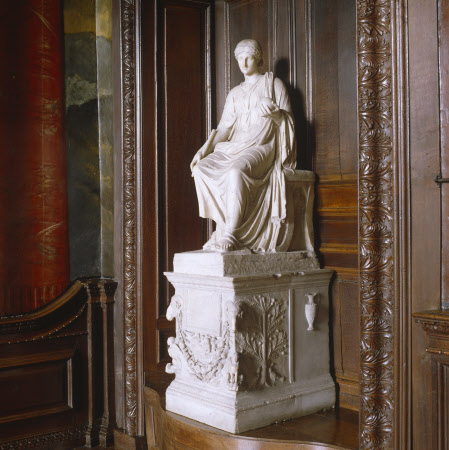 Marble sculpture, Demeter seated on a Funerary Altar, 1st - 2nd century AD, made up in the 18th century (acquired by Lord Clive). The head ancient, but not the original, the restoration of this and the right arm and hand 18th century, the funerary altar circa AD 100 formerly in the Mattei Collection in Rome, the altar let into a modern plinth with relief of sacrificial jug, a tree flanked by birds, garlands suspended from rams' heads, with sphinxes below, the reclining female possibly represents Semele. According to the Department of Archeology, National Museum of Wales the Latin inscription translates as 'To the gods the shades. To M. Caecilius Rufus, son of Spurius Suburan, a Shoemaker from the grove from the grove of Semele. According to his will Calvista Zosime and M. Caecilius, heirs set up (this monument).'

According to a document in the archive the sculpture and pedestal were imported from Leghorn (Livorno, Tuscany) after 1774 at the cost of 130 Crowns. Acquired by Lord Clive. The alter was formerly in the Mattei collection in Rome and the inscription is published in Corpus Inscriptionum Latinarum VI 9897(The British Museum 1984). Accepted by HM Treasury on 21st March, 1963 in lieu of tax and conveyed to National Trust ownership in 1992.