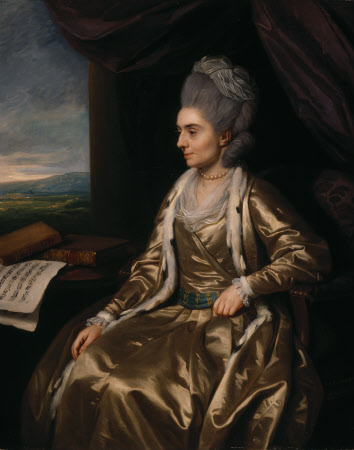 Margaret Maskelyne was the daughter of Edward Maskelyne of Purton, Wiltshire. In 1753 she married Clive of India in Madras after meeting him at Fort St. David on the Coromandel Coast.The musical score might allude to the soiree that Margaret held at 45 Berkeley Square on 13 March 1765, which featured the Mozart family (Wolfgang Amadeus was 8 years old at the time) and Manzuoli.

Oil painting on canvas, Margaret Maskelyne, Lady Clive (1733-1817) by Nathaniel Dance-Holland, RA (London 1735 – Winchester 1811), 1770 - 74. A three-quarter-length portrait of the daughter of Edward Maskelyne of Pinton, Wiltshire who married Clive of India in 1753 in Madras, seated, looking to her left, in purple dress and powdered wig. A musical score lies on the table and a landsape can be seen, to her left.