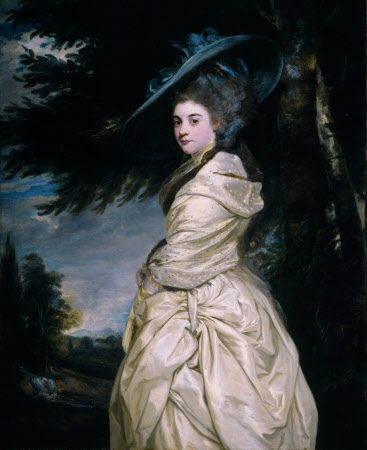 Lady Henrietta was the daughter of Henry Herbert, 1st Earl of Powis. In 1784 she married Edward, 2nd Lord Clive of Plassey, who was later created Earl of Powis in 1804. It was through Lady Henrietta that the Powis estates passed to the Clive family. She travelled to India with her daughters in 1798 during her husband’s tenure of the Governorship of Madras and stayed there until 1801. During this time she toured the southern regions of the country and formed a collection of Indian curiosities which are now on display in the Clive Museum at Powis. The hat and lace scarf she is shown wearing here do not appear in the 1778 engraving after this work: these elements appear to have been added at a later date.

Oil painting on canvas, Lady Henrietta Herbert, later Countess of Powis (1758-1830) by Sir Joshua Reynolds PRA (Plympton 1723 - London 1792), 1777. A three-quarter-length portrait of the daughter of Henry Herbert, 1st Earl of Powis (2nd creation), and later wife of Edward Clive, 1st Earl of Powis (3rd creation), standing, wearing a satin drees, with her back to the right and her head turned outwards, in a landscape. Engraved by Valentine Green in 1778. The hair was modified and the hat added at a later date.

Painted in 1777, before the sitter’s marriage to the 2nd Lord Clive, later 1st Earl of Powis; from whom, by descent, until 1963. Accepted by HM Treasury on 21st March, 1963 in lieu of tax and conveyed to National Trust ownership in 1992.