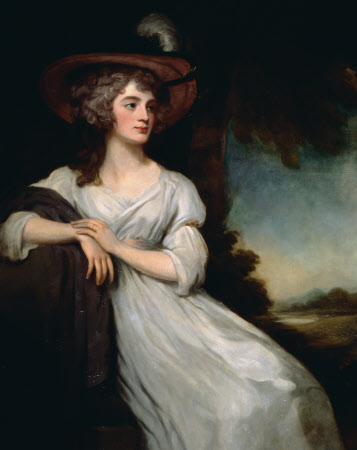 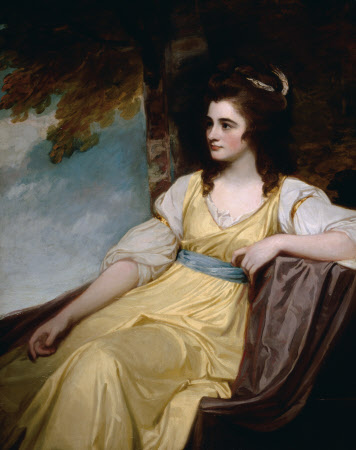 Rebecca Clive was the eldest daughter of Robert, ‘Clive of India’. She married General John Robinson in 1780. This painting is probably the full-length portrait of her that the artist George Romney began but never finished, which was sold for 20 guineas in 1805. The canvas was later cut down to a three-quarter length and completed by an unknown artist named ‘Mr Brown’, at the request of General Robinson. Romney was originally from Cumbria, but he settled in London in 1762 where he rose to fame as one the most fashionable portrait painters of the day.

Oil painting on canvas, The Hon. Rebecca Clive, Mrs Robinson (1760-1795) by George Romney (Dalton-in-Furness 1734 – Kendal 1802), possibly the full-length unfinished portrait for which 20 guineas was paid in 1805. A three-quarter-length portrait of the daughter of Clive of India, her delicate constitution led her to travel in Italy, in a white dress, a grey cloak and hat, her left hand resting on the wrist of the right hand, seated in a landscape. Companion picture T.POW.P.3.

Possibly the full length unfinished portrait for which 20 guineas was paid in 1805. Cut down and finished, after Romney's death, by 'Mr Brown of Cavendish Square'. Accepted by HM Treasury on 21st March, 1963 in lieu of tax and conveyed to National Trust ownership in 1992.