A set of three giltwood side tables 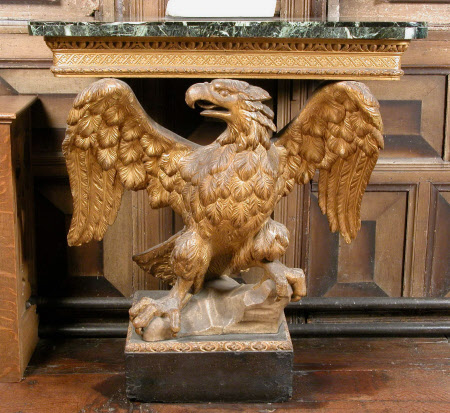 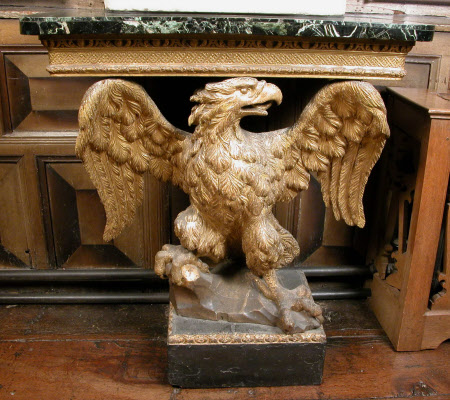 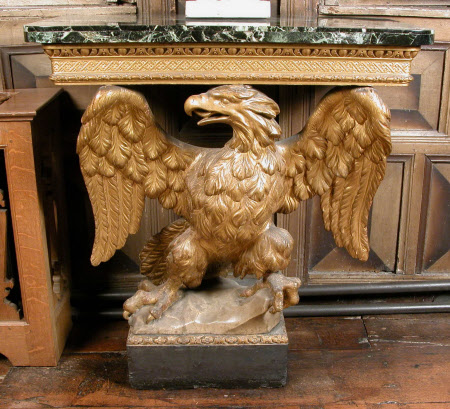 A set of three giltwood and marble topped side tables, English, circa 1740 and later. Each with a later verde antico marble top above a band frieze with egg and dart moulded edge and raised on eagle supports, standing on naturalistic plinths. Later oil gilded. Probably adapted and altered, see NT 11810 52 for a similar set of three tables in the Powis collection. Each share the later verde antico top and the egg and dart moulded frieze.

Adam Bowett discusses this form of table in 'Early Georgian Furniture 1715-1740' ACC 2009 pgs.228-231; 'Tables with bases carved as eagles, sphinxes and dolphins were one of the most popular manifestations of neo-Palladian taste, perhaps because of their compact form..All three designs are popularly associated with William Kent but it is difficult to document his responsibility. Of the three types the eagles are the most common.' The design was almost certainly taken form Italian sources and adopted by several furniture makers, the earliest bill known is from John Phillips for a pair of eagle tables supplied to Badminton House in 1735. Thomas Moore supplied a single table to Dudley Rider in May 1734 also William Bradshaw is known to have supplied similar. Trade cards of the 1730's and 40's advertising eagle tables include those of William Tomkins in London and Francis Brodie in Edinburgh. (James Weedon, March 2019)

Part of the indigenous collection of Powis Castle accepted in part satisfaction of the Estate duty after the death of the Right Honourable George Charles, 4th Earl of Powis, on 9th November 1952. The contract of the 'Offer of Property in Satisfaction of Estate Duty under the National Land Fund Scheme' was completed on 21st March 1963. Conveyed to National Trust ownership in 1992.