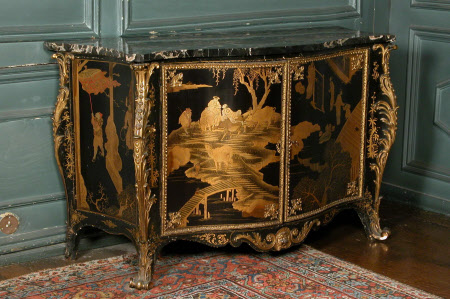 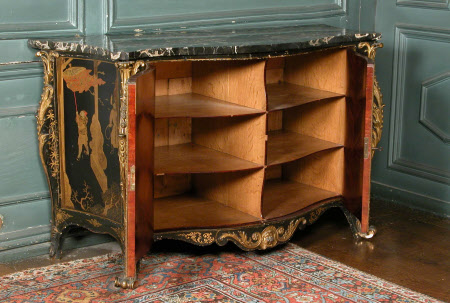 One of a pair of Chinese lacquer, ormolu mounted and marble topped serpentine commodes, attributed to Pierre Langlois (fl.1759-1781) London, circa 1760-1765. The ormolu mounts attributed to Dominique Jean (fl.1760s-1807). The Chinese lacquer panels probably removed from a late 17th century room screen, reshaped and adapted. Each commode with a Noro Portoro shaped marble top above a pair of cupboard doors, one commode fitted with drawers and shelves and the other with shelves, the interiors veneered in padouk and raised on splayed legs and with a shaped apron. The lacquer panels depicting figures and buildings within chinoiserie landscape scenes to both the front and sides of the cabinets. Both with applied cast corner mounts continuing to scroll sabot, the doors edged with cast mouldings and fleur de lys brackets to the corners.

Langlois traded from 39 Tottenham Court Road, London, from 1759 supplying a wide range of newly fashionable French style furniture to his impressive clientele, which included the Dukes of Bedford and Northumberland, Sir Lawrence Dundas, Horace Walpole and the Earl of Coventry. His French background is revealed on his trade card, which incorporates various examples of furniture and objects in the French or 'modern' style within an elaborate rococo cartouche. The text appears in both French and English and while the English text advertises 'all Sorts of Fine Cabinets and Commodes, made & inlaid in the Politest manner with Brass & Tortoiseshell', the corresponding text in French is actually more explicit in stating the various types of furniture produced by the workshop and lists floral marquetry and gilt-bronze mounts as a specialty.In the Universal Director of 1763, Thomas Mortimer noted that Langlois made ‘all sorts of curious inlaid work, particularly commodes in the foreign taste, inlaid with tortoiseshell, brass, etc.’. His early marquetry was closely related to that of the Parisian ébéniste, Jean-François Oeben, in whose workshop he may have trained. An almost identical pair were made for Walpole's Strawberry Hill in 1763, one now in the collection of the Legion of Honor Museum, San Francisco. Comparable examples using Chinese lacquer in the National Trust Collection include a pair of commodes at Uppark (NT 137549) and another at Polesden Lacey (NT 1245863).Langlois shared his workshop with Dominique Jean, a bronze caster and gilder and while Jean was employed by Pierre Langlois, he evidently worked independently, and was employed through William Gaubert at Carlton House (1783-86), supplying chandeliers and mounts, chasing and gilding. He also worked as a primary gilder for the Duke of Northumberland, another Langlois client, and is known to have provided furniture mounts in the 1780's for the Swedish cabinet-maker Christian Furloh (later Christopher Furlogh), who worked at 24 Tottenham Court Road circa 1769-1785. (James Weedon March 2019)

Recorded in 1944 Inventory as ‘A 4ft serpentine front Japanese lac commode of Louis XV design figured marble top interior fitted 3 mahogany drawers with brass handles and 2 shelves panelled doors ormolu mouldings and mounts on claw feet (English 18th century)' in Tapestry Drawing Room (Blue Drawing Room). Part of the indigenous collection of Powis Castle accepted in part satisfaction of the Estate duty after the death of the Right Honourable George Charles, 4th Earl of Powis, on 9th November 1952. The contract of the 'Offer of Property in Satisfaction of Estate Duty under the National Land Fund Scheme' was completed on 21st March 1963. Conveyed to National Trust ownership in 1992.