The Flight of Mark Antony and Cleopatra 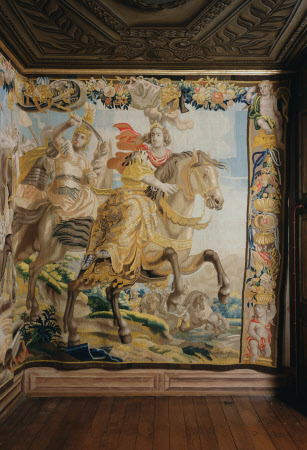 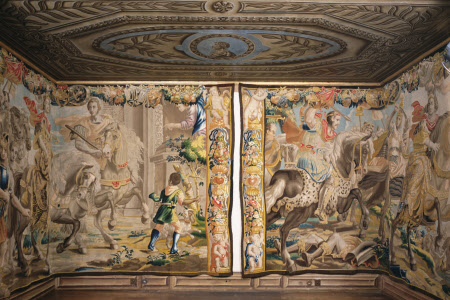 Tapestry, wool and silk, 6 warps per cm, The Flight of Mark Antony and Cleopatra from a set of two of The Story of Antony and Cleopatra, probably Joris Rombouts, Antwerp, c. 1670-1680. Three life-sized figures on horseback in a landscape galloping from left to right. To the right is Cleopatra, riding a leaping brown horse and wearing golden dress with a brocaded skirt, a mantle of ermine tails and a red cloak around her shoulders and a golden crown adorned with pearls. Behind Cleopatra is Mark Antony, also on a brown horse and wearing silver scale-armour over a blue tunic and an ornate plumed helmet with gold decoration, holding a sword above his head and turning to fight off his attackers. In hot pursuit is Octavian, riding on a leopard-skin saddle, his horse foaming at the mouth, dressed in a silver breastplate over a blue leather tunic with a narrow diadem tied around his head, and holding aloft a spear. Behind the main figures are more horsemen including one blowing a trumpet and another wearing a bear’s skin on his head, whilst a fallen soldier lies on the ground before Octavian. Beneath the horses’ feet is a nondescript landscape, and to the right a view to another group of mounted soldiers in the middle distance. The borders are composed of festoons of fruit and flowers with putti at the sides and military trophies at the top. There is no lower border, and one of Octavian’s horse’s hooves breaks the frame and extends into the lower galloon.

Accepted by HM Treasury on 21st March, 1963 in lieu of tax and conveyed to National Trust ownership on 29th November 1992