A cat playing with a snake 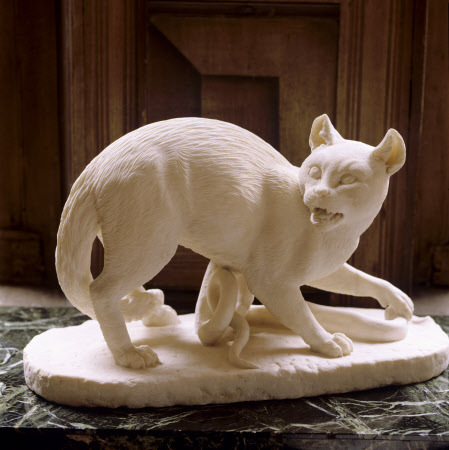 A cat has caught a snake and holds its head to the floor with one paw, but her attention is turned away to snarl at an approaching assailant, who is perhaps hoping to steal her prey. This remarkable sculpture is unique, and little is known about its history. It was purchased by Robert Clive of India (1725–74) during his grand tour in Rome and was considered to be an antique Roman sculpture. In 1774, Clive wrote to his wife Margaret, who loved cats, to tell her he had seen this ‘antique Cat’ and hoped to purchase it offering ‘lavish’ sums of money for her sake. The unknown sculptor shows extraordinary skill in crafting the hard, crystalline Greek marble into this naturalistic impression of a cat with her tail tucked beneath her body in fear. The design for this sculpture could have been based on an original Greek composition, as depictions of cats are very rare in Roman art. The sculpture is difficult to date with certainty, and it has been suggested that it could have been made at a later date for the grand-tour market. However, recent research has indicated the sculpture is likely to be Roman.

Marble, a cat playing with a snake, Roman, 1st or 2nd century (1–200 AD), with 18th-century restorations. A marble sculpture of a wild cat toying with a snake. The cat crouches, its front left paw resting on the neck of its prey, its head turned to the right as it hisses to warn off an intruder. The sculpture is carved of Greek Thasian marble, noted for its pure white, crystalline qualities. The cat’s coat is finely chiselled to mimic rough fur. Break lines are present in all four limbs; the cat’s tail and the body of the snake were restored in the early 1980s and again in 1999. The left ear is a modern replacement.