Aurora quitting Tithonus in her Chariot (after Guercino) 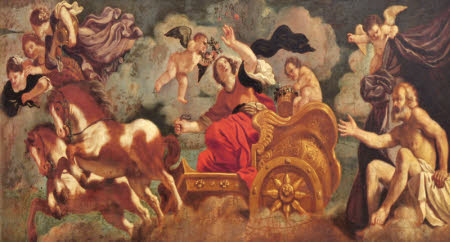 This painting is a copy, in reverse, of Guercino’s 1621 fresco in the Casino di Villa Boncompagni Ludovisi in Rome, Italy. It was probably copied from an engraving. It recalls the story of Aurora, goddess of dawn, as told in Homer’s epic Greek poem, Iliad. Aurora, who takes centre stage riding a horse-drawn chariot, is depicted leaving her aged husband, Tithonus. She holds a torch aloft, rolling back the clouds and turning night into day. In front of her are three ‘Horae’ – goddesses of the seasons.

Oil painting on canvas, Aurora (after Guercino), British School, 18th century. A copy (in reverse) of the fresco in the Casino di Villa Boncompagni Ludovisi, Rome (Casino dell'Aurora) of Aurora by Guercino (Cento 1591 – Bologna 1666). As related in Homer’s epic Greek poem, Iliad (XI) Aurora, the goddess of dawn, kidnapped four men, Cephalus, Clitus, Ganymede and Tithonus, to be her lovers. Ganymede was later stolen from her by Zeus, disguised as an eagle, to be his cup bearer and Cephalus longed to return to his mortal wife Procris, so Aurora finally released him. Her favourite was Tithonus, son of Laomedon and brother of Priam. Zeus granted him immortality but, cruelly, not youthfulness. Here he is shown here sitting on a cloud as an old man whilst Aurora drives away from him in her chariot. Winged putti bestow flowers, symbolising the sun's generative power and three maidens precede her, one of whom holds an urn, symbolising the dawn's dew and referring to the death of one of their sons, Memnon, who was killed by the mighty Greek warrior, Achilles, in the Trojan war. Aurora is so distraught by his death that her tears cover the earth as she flies across the skies every morning.