1st Earl of Powis with his Family 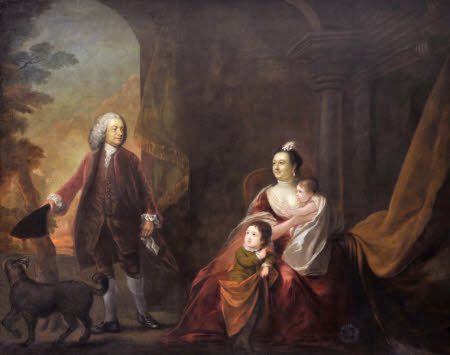 In this family portrait, Henry Herbert is shown standing in a statesmanlike manner, accompanied by his dog in an outdoors setting, framed by a grand archway. His confident stance and grandiose gesture reflects his esteemed status as an influential figure in politics and royal administration. To the right of the composition, his wife Barbara assumes a motherly role: she sits within a magnificent interior and is accompanied by their two young children, George and Henrietta. This representation of husband and wife in contrasting roles resonates with contemporary portraits of King George III with his wife, Queen Charlotte, and their children.

Accepted by HM Treasury on 21st March, 1963 in lieu of tax and conveyed to National Trust ownership on 29th November 1963.