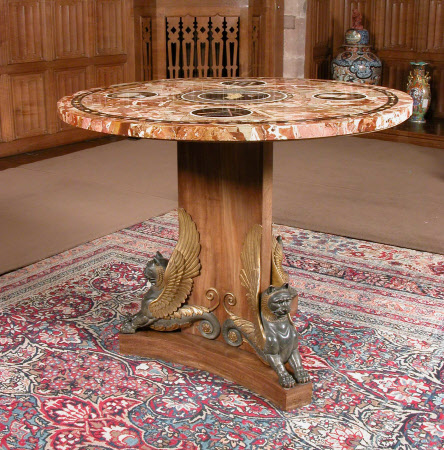 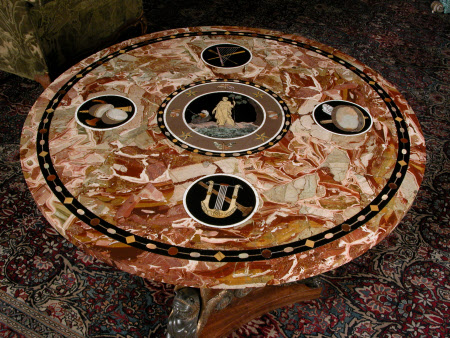 A pietra dura inlaid Sicilian jasper table top raised on a mahogany, parcal gilt and bronzed pedestal table base, the marble Italian, circa 1800, the base after a design by Henry Holland (1745-1806) English, circa 1805-10 The circular top veneered in jasper and inlaid with four medallions depicting musical instruments and a central roundel of a Greek warrior. The triform column with three bronzed and parcel gilt winged Chimera, raised on a triform plinth base.

Henry Holland was an architect and designer to the English nobility. Born in London his father owned a building firm constructing several of Capability Brown's (d.1783) designs. Brown and Holland formed a partnership in 1771 and were responsible for Robert Clive's house Claremont in Surrey. John Soane, later Sir John Soane (1753-1837), was employed in Holland's office at this time and worked on the project as a draftsman and junior designer. Holland's interiors for Claremont owe much to the contemporary work of Robert Adam. The design of the winged Chimera closely follows a published design by Holland for a stand for a lamp, now in the collection of The Royal Institute of British Architects. This antique form was largely popularised by Charles Percier and Pierre-François Fontaine, Napoleon’s official architects. They published the first instalment of 'Recueil de Décorations Intérieures comprenant tout ce qui a Rapport à Ameublement' in 1801, a hugely influential pattern book that not only provided the blueprint for the French Empire style but must have influenced British designers such as Thomas Hope, George Smith, Charles Heathcote Tatham and Holland, all of whom embarked on Grand Tours to draw ion the influences of ancient Greece, Rome and Egypt. Comparisons can also be drawn with a pair of tables supplied to Attingham Park by Thomas Donaldson (d.1857) (NT 608144). Donaldson was a cabinet-maker, carver and gilder of Shrewsbury, and worked extensively at Attingham, supplying furniture, hanging pictures, and carving and gilding metres and metres of decorative woodwork. These tables were supplied by him for the Picture Gallery at Attingham, built to the designs of John Nash between 1805 and 1808. The tables are very close to the designs of Thomas Hope and of Percier and Fontaine. Delivered to Attingham in 1811, they cost £290. Donaldson's bill describes them as: ‘a Pair of Elegant Tables for Jasper tops of fine Coromandel wood. The Cornice & Ornaments of the Frieze, and the winged Chimeare Legs Carved out of the Solid and double gilded in Burnish’d Gold in the richest manner' £290. (James Weedon, February 2019)

Part of the indigenous collection of Powis Castle accepted in part satisfaction of the Estate duty after the death of the Right Honourable George Charles, 4th Earl of Powis, on 9th November 1952. The contract of the 'Offer of Property in Satisfaction of Estate Duty under the National Land Fund Scheme' was completed on 21st March 1963.