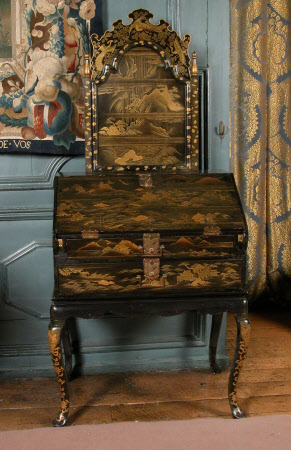 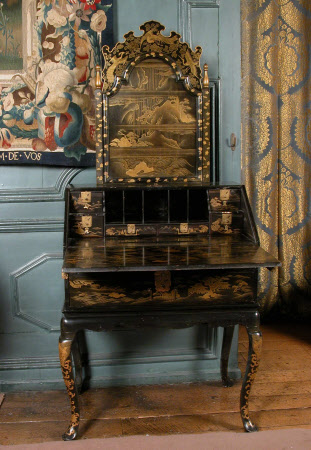 One of a pair of black and gilt chinoiserie bureaux on later stands, the bureaux Chinese Export, mid 18th century. The stands probably English, mid 18th century. Each with a raised panelled screen, with an arcaded frame and surmounted by a shaped pediment held by moulded square section supports with finials. The bureau with a fall enclosing a fitted interior of drawers and compartments and raised on a later stand with cabriole legs and pad feet. The whole decorated with mountainous landscape scenes, flowers and exotic birds.

These mid 18th century bureau-dressing-table, usually with a fitted mirror, belong to a type popularly known as 'Union Suites'. One such bureau featured in John Carter's 1788 watercolour of the antiquarian Horace Walpole's parlour at Strawberry Hill (A. Chalcraft and J. Viscardi, Strawberry Hill, 2007, p. 29). The Powis bureaux are fitted instead with a chinoiserie panel which maybe purely for decorative purposes. These maybe the 'Two japan Dressing Boxes' in the 1775 inventory. (James Weedon, February 2019)