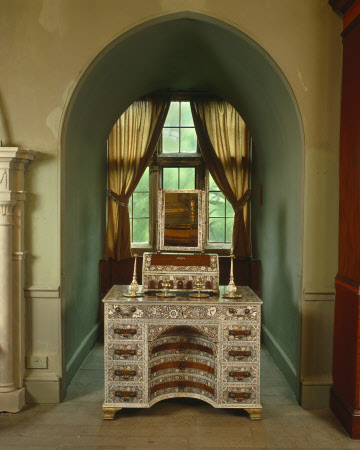 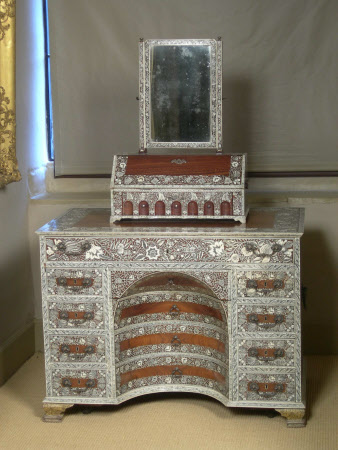 An ivory-inlaid, engraved ivory-crossbanded rosewood dressing table or chest, Visakhapatnam, circa 1750, the feet supplied by George Smith Bradshaw (1717-1812) of Dean Street, London in 1761. With one long fitted drawer above two banks of short drawers flanking a recessed and arched kneehole fitted with four further drawers. All-over banded with engraved ivory highlighted with black lacquer, and inlaid throughout with flora and leaves. The handles and escutcheons made of silver. Raised on later shaped bracket feet, decorated in pencil-work to imitate the inlay on the chest.

This magnificent dressing table was in England by 1761, when its feet were supplied (possibly as replacements) by the upholsterer George Smith Bradshaw (1717-1812). It was made in the city of Visakhapatnam (Vizagapatam) in the state of Andhra Pradesh in India. A natural harbour with a thriving textile industry, it was also a centre for cabinet-making renowned for its use of ivory inlay and veneers. As European colonial activity in India increased over the first half of the 18th century, territorial wars and the struggle for dominance intensified, and Visakhapatnam was ruled by the Mughal Qutb Shahis (between 1689 and 1724), Nizam (1724–1757) and France (from 1757), before being captured by the British East India Company armies in 1765. This British colonial encroachment in India involved the looting and seizure of its material culture – art, precious objects and resources – but it is also affected local artistic production and a transfer of materials, techniques, knowledge and fashions which, rather like in Guangzhou (see Chinese Export furniture at Osterley, NT 771891, 773356 and 773362) and other trading ports, stimulated an export market in furniture specifically for European buyers. It is likely, therefore, that some of the furniture from Visakhapatnam now in English collections was legitimately purchased, although it should also be noted that it did feature among the ‘gifts’ exchanged between Indian rulers and Europeans. It is thought that Robert Clive purchased this dressing table, together with its companion toilet mirror (NT 1180669), whilst in India. It is largely English in form (although the apsidal kneehole is not typical of English mid-18th century furniture) but in its materials, decoration and exquisite craftsmanship, is quintessentially Indian. In common with other examples judged to date from the middle of the 18th century, it is made of only one primary timber and the marquetry is painterly, featuring large leaves and oversized Indian flowers tied with ribbons. An undocumented chest or bureau of this type (NT 514493), with the more typical rectangular kneehole, was bequeathed to the National Trust with Anglesey Abbey by Huttleston Rogers Broughton, 1st Lord Fairhaven (1896-1966). The Powis dressing chest was listed in the 1774 inventory of the contents of 45 Berkeley Square, the London house of Robert Clive, 1st Baron Clive (1725-74), and was described as ‘A Curious commode Chest of Composed of [sic] Rosewood inlaid with Ivory and Silver mounted...’. It was at Walcott Hall until the 1930s, when it was brought to Powis Castle. It is now displayed in the ‘Clive Museum’ at Powis and is part of the largest private collection of Indian artefacts in the UK. It was assembled by two generations of the Clive family: Robert Clive (who became known as Clive of India) and his son Edward Clive (1754-1839), who married Henrietta Herbert, daughter of the 1st Earl of Powis (2nd creation). Robert Clive was an important figure in Britain’s East India Company, the powerful corporation that dominated trade between Europe, Asia and the Middle East between 1600 and 1857. The East India Company fought three wars against Mysore to control the land and its rich resources, before definitively seizing power at the Battle of Seringapatam in 1799, when Tipu Sultan was killed. After the battle, the British Army swept into the city, and Tipu Sultan’s treasury of precious objects and artefacts were taken to be distributed among the victors, some of which are now in the ‘Clive Museum’ at Powis. The collection is currently being researched and reinterpreted.

Acquired by Robert Clive (1725-1774) circa 1750. Listed in 1774 inventory of 45 Berkeley Square as 'A Curious commode Chest of Composed of Rosewood inlaid with Ivory and Silver mounted mark'd A6'. Brought to Powis Castle from Walcot Hall in 1930. Accepted by HM Treasury on 21st March, 1963 in lieu of tax and conveyed to National Trust ownership on 29th November 1963.