An Unknown Lady holding a Miniature 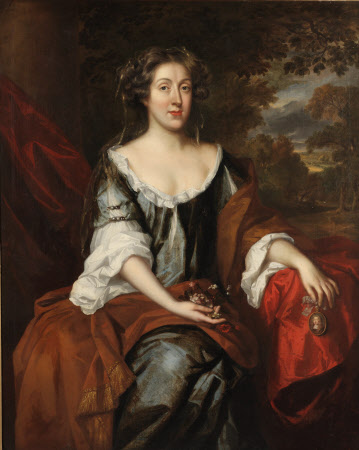 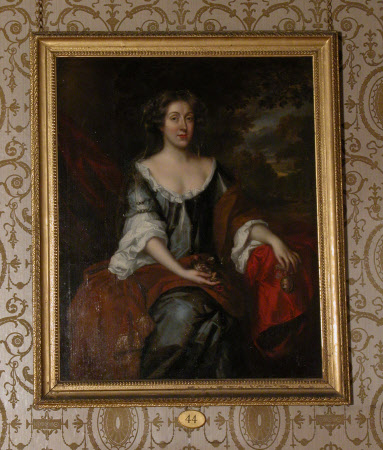 Oil painting on canvas, An Unknown Lady holding a Miniature, possibly Charlotte Bridgeman, Lady Myddelton (d. 1694), attributed to Jan van der Vaart (Haarlem 1647 – London 1721), 1680s. A three-quarter length portrait of a young woman, seated in a landscape, upper part of her torso turned slightly to right, head almost facing, gazing at spectator, wearing a blue décolleté dress over a white shift, with a brown cloak and red drapery and a veil in her hair. Her right hand is resting, palm upwards on her lap with a clutch of leaves including a rose and orange blossom and her left arm rests on a plinth covered in a drape, and from her forefinger and thumb hangs a miniature, representing a young man in a brown coat and long white collar and long blonde ringleted hair, of around 1660-70. Possibly Charlotte Bridgeman, Lady Myddelton (d. 1694) who was the second wife of Sir Thomas Myddelton, 2nd Bt whon she married in 1677 but who died ten years before she did in 1684. The young man in the miniature, who seems of a previous generation, does not resemble him or her father though.

Previously amongst the chattels that, in 1978, were acquired along with Chirk Castle from Lt-Col Ririd Myddelton (1902–1988) by the National Land Fund and handed, on loan for 99 years, to the Secretary of State for Wales. In 1981 Chirk was transferred into the ownership of the National Trust. Chattels from the estate of Lady Margaret Myddelton (1910 - 2003) were accepted in lieu by HM Treasury and transferred to the National Trust in 2006.

Chirk Castle, The Myddelton Collection (accepted in lieu by HM Treasury and transferred to the National Trust in 2006)

Verso: Inscribed on back of frame: Gallery No.2